IT came from outer space: How space technology conquered the world

The first satellite, Sputnik, was designed to look like the future. Since then, space research has led to much of our most world-changing tech.

The Russians started it all. The timeline that ends with you reading this on your smartphone began on October 4, 1957. That was the day the former Soviet Union announced it had placed the first artificial satellite into orbit around our planet.

About the size and shape of a basketball and weighing little more than 84kg, Sputnik took about 98 minutes to follow its elliptical path around the Earth. A polished aluminum-alloy orb with four long antennae pointing straight out behind it, Sputnik had a futuristic dynamism not seen before in the West.

Sergei Korolev, who designed both the satellite and powerful R-7 rocket that carried it into space, meant it to have that effect. He’d foreseen the satellite’s technological impact and wanted to see Sputnik replicas on display in the museums of the future.

He wasn’t the only one who’d foreseen its impact. Back in 1947, James Lipp, head of the US’s RAND (Research and Development) Corporation Missile Division, remarked: “One can imagine the consternation and admiration that would be felt here if the United States were to discover suddenly that some other nation had already put up a successful satellite.”

RAND was one of the first organizations to study how space technology might shape human behavior on Earth. When it came to Sputnik, the anticipated “consternation and admiration” had unexpected long-term consequences for information technology.

The satellite’s launch marked a high point in the International Geophysics Year. Its organizers, the International Council of Scientific Unions, had approved a resolution calling for artificial satellites to be placed in orbit around the Earth to study its surface from above. As a simple telemetric device capable of being tracked across the sky from Earth, Sputnik marked the start of the collective mapping of our planet, revolutionizing global navigation, travel and communication. The GPS trackers in smartphones are just one of its many outcomes.

It’s often the unintended consequence that has the most profound impact. Rattled by the Soviet Union’s lead in space, the US concentrated resources on closing that gap and pulling ahead in areas where they already had an edge. President Eisenhower had just appointed a new Defense Secretary: Former Procter & Gamble Promotions Manager, Neil McElroy. McElroy’s consumer goods experience brought a more integrated organizational approach. The individual initiative became subordinate to a larger, more coordinated system.

Nobody builds anything destined for outer space by themselves: Rockets, satellites and spacesuits are the work of coordinated teams.

McElroy’s principal achievement was to revolutionize funding for scientific research by establishing the Advanced Research Projects Agency (ARPA.) In 1969 ARPA developed the earliest model of the internet, ARPANET. This breakthrough was an unexpected outcome of the Soviet Union taking such a decisive lead in the Space Race with Sputnik.

Putting connection at the center of innovation

ARPA funneled resources into areas where the US was ahead of the Soviets: Developing data processing, computers and communication networks. ARPA funding meant companies like IBM, Western Electric and Bell Telephone were soon working with Massachusetts Institute of Technology’s national security research and development lab, Lincoln Laboratories and the Jet Propulsion Labs at California’s science and engineering institute Caltech.

By the end of the 1950s, ARPA’s approach to experimentation and innovation – connecting academics with business strategists, researchers with engineers, designers with manufacturers – had a counterpart in NASA, the US’s newly formed National Aeronautics and Space Administration.

At the same time, the RAND Corporation had turned its attention to low-Earth orbit. Working with audiotape company Ampex, it developed a satellite-based video system to spy on enemies. Throughout the rest of the 20th century and well into the 21st, the impact of videotape on how television shows and films were made, distributed and seen would be enormous.

This video system captured Vice President Richard Nixon confronting Soviet Premier Nikita Khrushchev over the USSR’s missile technology in 1959. While Nixon and Khrushchev clashed in public, NASA displayed its first astronauts at a press conference. The ‘Mercury Seven’ fast became media personalities. “We have faith in the space age,” one astronaut told the press. “All of us have faith in mechanical objects.”

Perhaps not quite enough faith, as it was Soviet cosmonaut Yuri Gagarin who became the first human launched into Earth’s orbit. This great leap was really a series of tiny cautious steps. The physiological problems of life in space remained unsolved.

How would humans survive outside the protection of the Earth’s atmosphere? One unusual response came from scientists Manfred Clynes and Nathan Kline in a magazine article published in 1960, Cyborgs and Space. They suggested: “There may be much more efficient ways of carrying out the functions of the respiratory system than by breathing, which becomes cumbersome in space. One proposed solution for the not too distant future is relatively simple: Don’t breathe!”

Coining the term ‘cyborg,’ Clynes and Kline imagined ways machines might help human biology adapt to the hostile environment of space. “If man attempts partial adaptation to space conditions, instead of insisting on carrying his whole environment along with him,” they argued, “a number of new possibilities appear.”

The key possibility was an expanded understanding of how human physiology can interact directly with advanced engineering techniques in the form of prosthetics, exoskeletons, wearable technology, robotic limbs and implants – all now firmly established areas of scientific research and startup ventures.

While our understanding of ‘cyborgs’ has changed since the 1960s, the idea of the technologically enhanced human is now a reality.

According to one estimate, people automatically check their smartphones for images, locations and messages 80 times a day.

The symbiosis between humans and machines underpins both space exploration and data processing. For astronauts interacting with the artificial work environment aboard the International Space Station, the ease of use of sophisticated technology can be a matter of life and death.

Astronauts survive in space only because they’re kept safe in a seamless technological bubble. Every aspect of life on Earth must be replicated in space, from the most extraordinary to the most banal.

Urban myths link NASA to many materials, fabrics and gadgets. In fact, they didn’t invent Teflon, Velcro or the powdered drink mix Tang. Teflon had been around since the 1930s, Velcro since the 1950s and Tang was on the market just as NASA was finding its feet.

Mercury astronaut John Glenn drinking Tang in orbit as part of an experiment did, however, do a lot for the brand. NASA may not have invented these products, but it helped to popularize them. Having your product associated with astronauts and the space race connected it with science and discovery.

Sometimes the association was so close misunderstandings persist. A private company invented and developed the chrome-plated Fisher Space Pen, capable of writing upside-down and in zero gravity. Both NASA and the Soviet Union space program became their customers.

It’s not as if NASA wasn’t producing enough of its own tech spinoffs. In 1976, NASA started its Technology Transfer Program to ensure there could be commercial licensing for innovations resulting from space exploration. 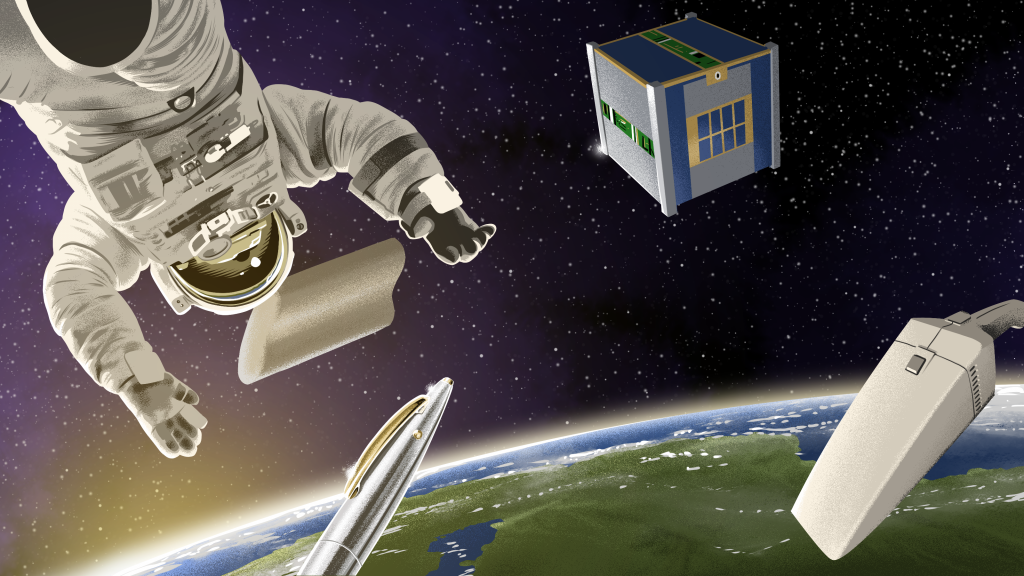 Nearly every aspect of our lives has benefitted from this approach. For example, NASA sponsored research into using algae to recycle waste in outer space, only to discover that it made an excellent nutritional supplement for developing infants. Water purification systems devised for the International Space Station have improved water safety on Earth, and NASA studies in high-altitude wind resistance have led to more aerodynamic truck design.

NASA’s experiments miniaturizing cameras for use in space led to the active pixel sensor now used in the standard smartphone camera. Today’s smartphones also benefit from embedded web technology used onboard the International Space Station to conduct experiments remotely over the internet. This led to the Internet of Things (IoT): Remote wireless connectivity between devices in smart homes, smart cities and all manner of wearable technology from watches to glasses and bracelets.

Mapping technology currently focused on the surface of Mars is used to create detailed geospatial views of Earth’s cities.

Smartphones use space technology, but they’ve also become space technology. CubeSats are small square satellites, a fraction of the size and weight of Sputnik, that give academic science its own space program to expand knowledge and research. Started in 1999 as a collaboration between California Polytechnic State University and Stanford Space Systems Development Laboratory, they can be used as single units or in orbiting networks.

In 2013, NASA technicians launched the first CubeSats fitted with iPhones to take pictures from space and transmit the data back to Earth. Almost 60 years after Sputnik circled the planet, a smartphone took the first space selfie. The possible uses for such large-scale real-time data are astronomic – for meteorology and cartography, logging and agriculture, oil and gas, insurance and transport.

We may inhabit a tiny planet in a vast expanding universe, but the space surrounding us is getting smaller and cheaper to access. Good business, as always, is where you find it. Perhaps now is the time to consider how space technology can help your company gain a competitive edge.

Any data you collect will probably leak. Any data you retain will definitely leak, given enough time. Cory Doctorow challenges us to think differently about customer data.

Climate change is the world’s hottest topic. Literally. What role can the technology industry play? These five technologies are making a difference right now.

It’s easy to think of small businesses as less attractive targets for cybercriminals, but nothing could be further from the truth. Here’s how to stay safe.

Ken Hollings is a writer and broadcaster who explores the relationship between culture and technology, specifically how they shape and influence each other. His books include Welcome to Mars, The Bright Labyrinth and The Space Oracle.