Far from AI stealing our jobs, the future could be full employment

Predictions AI will steal our jobs are almost baseless. If we face mass unemployment, economics has a solution. But we must change our thinking.

In the run-up to the coronavirus pandemic, future-gazing economists were increasingly concerned with technological unemployment: The idea we’ll replace human workers with automated systems, creating social unrest among surplus workers.

If the prospect of guillotine-wielding retirees didn’t worry you, the economists asked who would buy what robots built. Workers would stage uprisings, unable to buy anything on their way home from the barricades. It wouldn’t be the first time automation has brought social unrest – the term ‘Luddite’ comes from a movement in the UK’s industrial revolution that saw workers destroying machinery that was replacing them.

Many have proposed solutions to this (speculative) crisis, most prominently Universal Basic Income (UBI:) A regular pay packet for every person, with no means testing. It would lubricate the economy’s supply side and dry up the reservoirs of guillotine-building fuel. UBI may be a good idea, but not because of technological unemployment.

The poster child for technological unemployment is trucking. Artificial intelligence (AI) boosters will tell you being a trucker is one of the most common jobs in the US and that self-driving trucks are within our grasp.

But there’s more to the story. “Trucker” is one of the most common jobs in the US because the Bureau of Labor Statistics deems “trucker” includes anyone who operates a delivery vehicle, from a van to a long-haul 16-wheeler.

Self-driving vehicles are nowhere near ready to replace urban delivery drivers. It’s true that if given their own lane on major highways, automated lorries could probably navigate reliably. How exciting. We’ve just invented a substandard freight train.

That all said, I’m a science fiction writer. My job is to imagine six impossible things before breakfast. I can conduct a thought experiment in which AI breakthroughs replace most of the jobs we’re doing today.

If that day comes, it will be a good one. It will free up people for the most urgent task our species faces – a project that will absorb all the work all of us and all our descendants can do, for centuries to come. I’m talking about climate change.

Remediating climate change will be unimaginably labor-intensive: Relocating every coastal city inland, building high-speed rail to replace aviation and treating runaway pandemics, to begin with. If automation takes your job, you’ll have another. You’ll have ten. Or a hundred.

Perhaps you think I’m dodging the question. If we’re stipulating a fundamental breakthrough that produces AI, what about a comparable geoengineering breakthrough? Maybe our AI will be so smart it will work out how to reduce Earth’s reflectivity, creating mass cooling to counter the greenhouse effect. 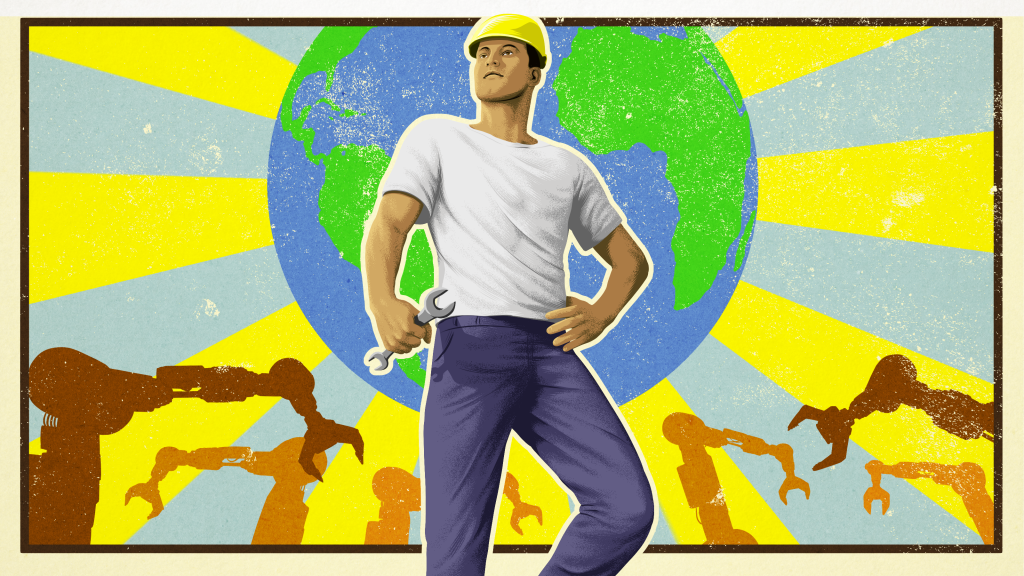 That’s less science fiction, more science fantasy. It’s too late to halt the climate processes that will flood every coastal city, displace hundreds of millions of people and sicken billions as pathogen-bearing organisms seek new habitats. These things will happen regardless of geoengineering.

Why? Consider, for example, the heat we’ve sunk into the oceans. The seas won’t cool until the energy trapped in their depths is expended. The ice caps are toast. I can speculate about AI all night long, but thought experiments that repeal the second law of thermodynamics aren’t scenario-building. They’re wishful thinking.

The COVID-19 crisis has taught us two critical things. The first: Ideological commitment to government austerity doesn’t build capacity – it destroys it. California spent 200 million US dollars in 2006 to stockpile N95 masks, ventilators and mobile hospitals. In 2011, the state dismantled its stockpile to save just 5 million US dollars a year on maintenance as its tax revenues fell after the subprime crisis.

The second: Sovereign currency issuers don’t have cash shortfalls during crises – they have capacity shortfalls. Since the pandemic began, central bankers of countries with monetary sovereignty (issuing free-floating currencies and not borrowing substantially in currencies they don’t issue) have been creating money. They just type zeroes into a spreadsheet at the central bank, and the money appears.

Orthodox economics says creating money produces inflation, but it didn’t, because the money was largely spent on things the private sector wasn’t buying. Inflation happens when the amount of money in circulation grows in relation to goods and services for sale. When the amount of currency goes up without a rise in available goods and services, you have more money chasing fewer things, and prices rise.

There’s one exception. The demand for healthcare has spiked, with no end in sight.

Central banks can print as much money as they want, but they can’t make ventilators appear on the market. California gave away its ventilators 12 years ago to save money. The US central bank could have filled California’s budget hole 12 years ago. Instead, they “saved” money and threw out the health infrastructure. Likewise, post-2008 austerity saw a drawdown of medical infrastructure across the European Union, particularly in the poorest countries like Italy, whose early collision with the coronavirus was made brutal by austerity-wrought brittleness.

Austerity is a bad bet. Money is the one thing central banks can’t run out of. But we sure can run out of ventilators and masks.

A better kind of full employment

If governments with monetary sovereignty can make as much cash as they need to buy things nobody else is buying without creating inflation, we won’t have an automation-driven unemployment crisis. If robots can supply all the capacity for our needs, central banks can distribute money and tax some of it away if the ratio of money to stuff-you-can-buy gets out of line.

Today, we have a kind of full employment. You can either be employed, underemployed or unemployed. The prevalence of unemployed and underemployed people controls inflation by keeping wages down. If you ask for a raise, your employer can threaten to fire you and hire someone unemployed.

A better kind of full employment would take every person made idle by the climate emergencies we’re about to face and give them essential, meaningful work for a decent wage. They’d be moving cities, building seawalls and fighting pandemics. They’d remediate habitats and care for refugees. No one is competing to hire others to do that work, but it’s work that will need doing, and there’ll be work enough for all.

Those fretting over technological unemployment are worried about a future, speculative moment when we go through a technological singularity, driven by general AI through nebulous means.

That’s a long way away, but in the next year or so, the pandemic crisis will end. About 30 percent of all jobs that existed before the crisis will no longer exist. The workers who did those jobs will be unemployed unless governments step up.

Governments will collapse if they choose unemployment over job creation, leaving a third of workers jobless and desperate. They may take their nations down with them. Nations with 30 percent unemployment can’t function and can’t create capacity that will make them resilient to the next crisis.

It’s a civilization-threatening downward spiral that will end the dream of creating superintelligent AI. Societies whose primary industry is digging through rubble for canned goods do not make AI breakthroughs.

The 30 percent unemployment “solution” solves nothing, but what about a job guarantee? The 30 percent working under government jobs programs will have working lives decoupled from the market. The movement of markets – especially financial markets – will be irrelevant to everyone except chart-watching, twitchy nerds.

Can we imagine a job guarantee? You might find it hard to believe we’ll find the political will to procure the labor of people without jobs. Even in the face of a climate emergency that needs labor to prevent destruction of cities and civilization, it’s hard to imagine such an ambitious program.

Universal Basic Income (UBI) is easy to understand. If some people don’t have enough money to make ends meet, give everyone money.

That’s a great idea, but it won’t address inequality. If most people lack the money to keep body and soul together, giving them a monthly stipend could make the difference between starvation and subsistence. However, for the small number who already have money enough to save, that stipend is just additional savings. Ten years later, the masses have averted starvation, while the wealthy minority have accumulated much extra wealth.

A job guarantee is also easy to understand. If we have a job that needs doing and a person that needs a job, we should pay the person to do that job at a sufficient wage with decent benefits. This will address inequality and create a true minimum wage. Without a job guarantee, the real minimum wage is $0 per hour: The amount you get if you want to work, but no one will give you a job.

Early 20th-century economist John Maynard Keynes once proposed we could jump-start an economy by paying half the unemployed people to dig holes and the other half to fill them. No one’s tried that, but we just spent 150 years subsidizing digging hydrocarbons out of the ground. Now we’ll spend 200 to 300 years subsidizing our descendants to put them back in.

Since neo-liberal economics swept the globe in the 1980s, business has used unemployed people to control wages. This tactic is no longer sustainable. The pessimistic future of your business is unemployment so high it will collapse the property relationships and rule of law your market relies upon. The optimistic future is simply that your firm hires in a way that makes it competitive with good public sector jobs remediating our planet.

From university project to global digitization, Climate Edge are helping farmers in developing nations solve crucial agricultural issues and prepare for the next generation.

Any data you collect will probably leak. Any data you retain will definitely leak, given enough time. Cory Doctorow challenges us to think differently about customer data.

Cory Doctorow (craphound.com) is a science fiction author, activist and journalist. He is the author of many books, most recently RADICALIZED and WALKAWAY, science fiction for adults, IN REAL LIFE, a graphic novel; INFORMATION DOESN’T WANT TO BE FREE, a book about earning a living in the Internet age, and HOMELAND, a YA sequel to LITTLE BROTHER. His next book is POESY THE MONSTER SLAYER, a picture book for young readers.