Woburn, MA – August 5, 2019 – According to Kaspersky research, in the second quarter of 2019 the total number of DDoS attacks grew by 18% compared to the same period in 2018. Application-layer attacks, which are more difficult to organize and protect against, showed significant growth increasing by a third (32%) compared to Q2 2018. As a result, these attacks now constitute almost half (46%) of all attacks prevented by Kaspersky DDoS Protection.

According to Kaspersky’s DDoS Q2 2019 report, the number of attacks in the second quarter of 2019 is 44% less than in Q1, which is not unexpected as such attacks usually reduce in activity in the spring and summer months. However, compared with the same period last year, the quantity of DDoS attacks in Q2 increased by 18% in 2018 and by 25% when compared to Q2 2017. 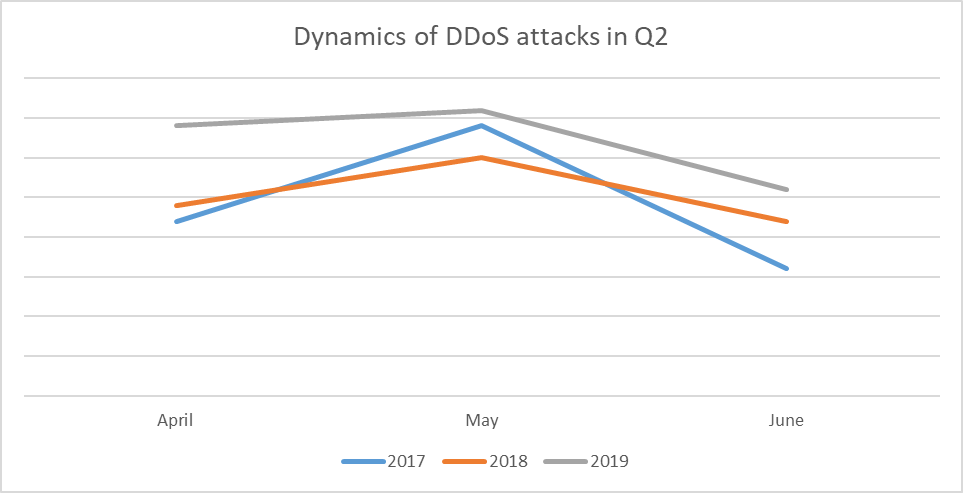 Notably, the seasonal decrease only had a minimal effect on the number of attacks on the application layer, reducing by just 4% compared to the previous quarter. These type of attacks target certain functions or APIs of applications in order to consume not only the network, but server resources as well. They are also more difficult to detect and protect from as they include processing legitimate requests. When compared to Q2 2018, the quantity of these attacks has increased by nearly a third (32%) and the share of such attacks in Q2 2019 rose to 46%. This is a nine percent increase in share than the first quarter of the year, and 15% more than the same period in 2018.

“Traditionally, cyber groups who conduct DDoS attacks go on holiday during the summer season and give up their hacking activity until September. However, the statistics for this quarter show that professional attackers who perform complex DDoS attacks are working hard even over the summer months,” said Alexey Kiselev, business development manager on the Kaspersky DDoS Protection team. “This trend is a cause for concern for businesses. Many are well protected against high volumes of junk traffic, but DDoS attacks on the application layer require identifying illegitimate activity even if its volume is low. We recommend that businesses ensure their DDoS protection solutions are consistently ready to withstand these complex attacks.”

The analysis of commands received by bots from command and control (C&C) servers revealed that the longest DDoS attack of Q2 2019 lasted 509 hours for a total of nearly 21 days. This is the lengthiest attack since Kaspersky started to monitor botnet activity in 2015. Previously, the longest attack lasted 329 hours and was registered in Q4 2018.

For more information, read the full report on Securelist.

Kaspersky is a global cybersecurity company founded in 1997. Kaspersky’s deep threat intelligence and security expertise is constantly transforming into innovative security solutions and services to protect businesses, critical infrastructure, governments and consumers around the globe. The company’s comprehensive security portfolio includes leading endpoint protection and a number of specialized security solutions and services to fight sophisticated and evolving digital threats. Over 400 million users are protected by Kaspersky technologies and we help 270,000 corporate clients protect what matters most to them. Learn more at www.usa.kaspersky.com.

Kaspersky
In the second quarter of 2019, the total number of DDoS attacks grew by 18%, compared to the same period in 2018