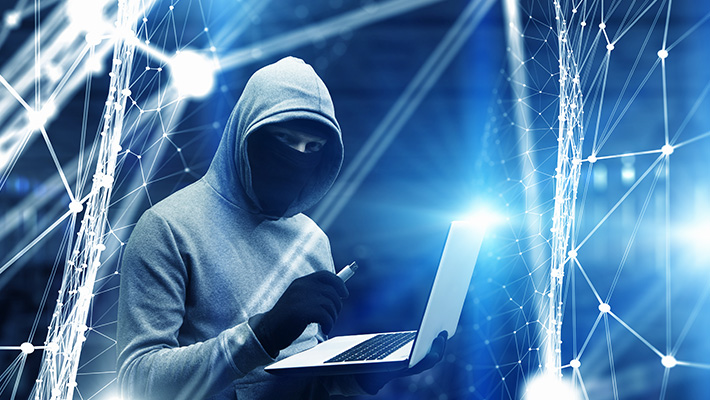 These are boom times for cyberthreats, cyberattacks and cybercrime. From identity theft to the retail hacks, these attacks are dominating the news cycle. On average, fraud victims will spend $776 of their own money and lose 20 hours trying to fix the mess that identity thieves made. Here are the seven ongoing threats that showcase today's challenges in keeping your data protected.

Retail hacks are a serious danger because they can impact virtually anyone. 2014 saw a rise in cyberattacks against large companies like Target, with hackers stealing 40 million customer credit and debit card numbers. Cybercriminals steal and sell this personal information on the black market, which can easily lead to identity theft. While much of the responsibility falls on the retailer, such as keeping their payment methods up to date and secure, keeping a close eye on your bank account and credit card statement is a good way to stay safe during retail attacks. 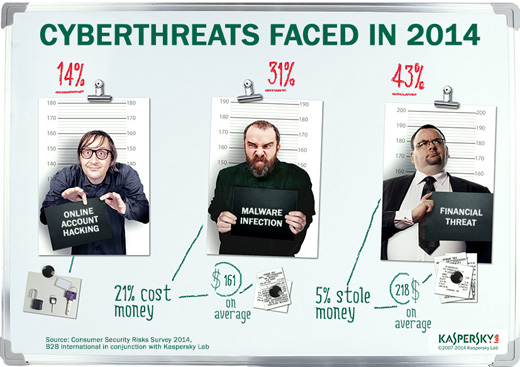 Cybercriminals can easily exploit vulnerabilities in your mobile phone to obtain private data. These vulnerabilities sometimes come from the apps you use or within your smartphone itself. Mobile phones are also vulnerable to malware, which can log keystrokes and capture screenshots. Protect yourself by researching the apps you download, being careful with what emails you open, and which pictures you decide to upload.

When cybercriminals trick people into revealing sensitive information such as passwords and social security numbers, it's called phishing. One of the most common ways phishing happens is when a person receives an email, purportedly from a bank or government organization, and are lured to authentic-looking sites. Once there, the person is asked to enter their password, social security numbers, and financial data.

Cybercriminals take this information and use it for their own purposes. Phishing is part of a larger problem called social engineering, which is essentially manipulating emotions in order to gain access to sensitive data. Don't fall for these tricks. Be skeptical of every email you receive, especially those requesting you reenter private information. Remember, real banks and government organizations never ask you to verify any potentially sensitive info.

One of the fastest growing online crimes is identity theft. Many of the points previously covered in this article can lead to identity theft, phishing emails and data breaches. However, your identity is also at risk through everyday materials such as your resume, home address, social media photos and videos, financial data, and so forth. Identity thieves will steal your personal information and open credit cards and loan accounts in your name. While some of this is out of the average person's hands, there is still plenty you can do to keep your identity safe.

Early in 2015, Anthem experienced a massive data breach by hackers and impacted 78.8 million people. In July 2015, hackers broke into the UCLA Health System's computer network, potentially gaining access to the personal information of 4.5 million patients. Healthcare records contain important and sensitive information and are prime targets for cybercriminals which can easily lead to identity theft. Often times this information is used for health insurance fraud, such as buying and selling fraudulent prescriptions. Always monitor the news for any reports for healthcare data breaches.

Targeting of Children by Sexual Predators

Users looking to exploit children lurk in dark corners of the internet to trade illegal, lewd photos of children. This is done over email, peer-to-peer programs, or, increasingly, through the dark web, an area of the internet that is inaccessible with standard search engines. While these are disturbing trends, it is best to leave these sites to law enforcement officials and for the average person to avoid them entirely.

Another online danger aimed at children is when sexual predators try and lure them into meeting off line, as well as either sending or asking for lewd, pornographic images. Make sure your children are well aware of the dangers of talking to strangers online and never to share personal information with people they've never met.

In the 21st century, bank robbing has gone digital. A famous example is when a criminal gang stole up to one billion dollars in about two years from a variety of financial institutions across the world. Cybercriminals targeted bank employees and officials with a malware called 'Carbanak' through emails. Once they had successfully infected the targeted computers, the cybercriminals were able to successfully mimic the employees' behavior and transfer money to themselves, direct ATMs to dispense money at certain times, and used e-payment systems to filter money. Some experts like Ben Lawsky, say that a major attack on the banking system could be the equivalent to a "cyber 9/11". Always research a bank's security history before choosing them, don't click on any strange links from emails, shred financial documents, and consistently monitor your account for any irregularities.

In a world of ever-evolving cyberthreats, what can you do to protect yourself? Security awareness is the first line of defense. There are powerful security tools available to help, but remember that you also need to use common sense to protect computer, your information and yourself.

Top 7 Cyberthreats to Watch Out for

Retail hacks are a serious danger because they can impact virtually anyone. 2014 saw a rise in cyberattacks against large companies like Target, with hackers stealing 40 million customer credit and debit card numbers. Cybercriminals steal and sell this personal information on the black market, which can easily lead to identity theft. While much of the responsibility falls on the retailer, such as keeping their payment methods up to date and secure, keeping a close eye on your bank account and credit card statement is a good way to stay safe during retail attacks.