What are the effects of cyberbullying? 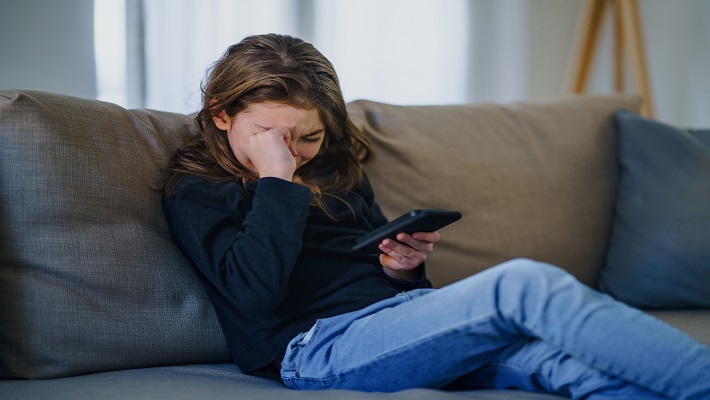 Cyberbullying is a very serious issue affecting not just the young victims, but also the victims' families, the bully, and those who witness instances of cyberbullying. However, the effect of cyberbullying can be most detrimental to the victim, of course, as they may experience a number of emotional issues that affect their social and academic performance as well as their overall mental health.

As parents today, you may not have ever experienced cyberbullying yourself. It may be hard to fathom how some words of text on a computer screen can lead to such trauma. After all, bullying has seemingly always been a facet of school and on the playground. Perhaps you have seen or experienced bullying when you were in school. Maybe you feel that bullying is just a normal part of school life.

You might also think that face-to-face bullying is much worse than cyberbullying since the victims of real-world bullying have more difficulty escaping their tormentors, while a victim of cyberbullying can simply turn off the computer or block a bully on a social media platform.

How can cyberbullying be worse than real-world bullying?

Cyberbullying doesn’t end when the school bell rings. It can continue at any time, throughout all hours of the night. It can come in the form of text messages, social media posts, chatroom messages, images and videos that have been altered, and many other digital forms.

Cyberbullying leaves little opportunity for victims to defend themselves. There are no teachers or parents to see what is happening and intervene to put a stop to it. Cyberbullying can also be anonymous, leaving the victim little recourse to even report the bully to an authority figure. And cyberbullying can showcase the incidents of bullying to hundreds, or potentially even thousands, within a short period of time using social media platforms.

If the victim does know who the bully is and chooses to block them on social media, the bully can simply create a new account. Or they can text, message, or use a friend's account. Kids today are extremely resourceful and savvy with technology. If they are intent on cyberbullying, there's not much a victim can do to stop them.

"People will do and say hurtful or demeaning things online that they would never say in person," says Eric Alcera, M.D., medical director for Hackensack Meridian Behavioral Health. Eric also says, “If a cyberbully decides to spread rumors or share embarrassing photos on social media, the words or images can go viral, hitting the radar of many more kids within minutes.”

In essence, cyberbullying is more relentless, crueler, and more damaging than real-world bullying. It is also one of the most significant stressors in a young individual’s life. And while children who are bullied often attempt to hide such events from their parents, there can be very noticeable changes in your child’s behavior if they are a continuous victim of cyberbullying.

Changes in behavior due to the effects of cyberbullying

The changes might not be readily apparent at first, but as time goes on, you may notice one or more of the following behavioral changes that can be strong indicators of cyberbullying.

If you think that some of these behavioral changes seem a bit extreme, such as thoughts of suicide, you should know that the relationship between bullying and suicide is a strong one. In some cases, bullying alone may not always be the sole cause. The child may already be experiencing feelings of depression or anxiety due to problems at home or a previous history of trauma.

However, a recent study concluded that victims of cyberbullying are twice as likely to attempt suicide or engage in acts of self-harm. Additionally, recent statistics reveal that 59% of U.S. teens have been bullied or harassed online, and over 90% believe it's a major problem for people their age.

Even more alarming, current research suggests that suicide attempts among adolescents have nearly doubled since 2008.

The effects of cyberbullying also include mental health issues, increased stress and anxiety, depression, acting out violently, and low self-esteem. Cyberbullying can also result in long-lasting emotional effects, even if the bullying has stopped.

These effects of cyberbullying can result in enduring feelings of embarrassment. Online bullying feels more permanent, especially when it is performed through social media posts that don’t immediately disappear. It can lead to overwhelming feelings of exposure and distress.

Another side effect of cyberbullying is that the victims may be excluded by others who also fear cyberbullying if they continue to remain friends with the victim. This causes the victim to become isolated and ostracized, with no one to turn to at school or at home.

It’s no surprise that one of the effects of cyberbullying is also anger. The range of emotions a victim may be feeling often devolves into anger. Some children may even begin plotting schemes of revenge, as has been evidenced in incidents of school shootings and other acts of aggression performed by bullying victims that couldn’t take it anymore.

The act of revenge also comes about as a way for a child to regain some sense of power because victims of cyberbullying often feel powerless to stop what is happening.

Behavioral and mental changes aren’t the only effects of cyberbullying. There can be physical effects as well. Intense feelings of stress and anxiety due to cyberbullying can result in physical issues such as insomnia, gastrointestinal issues, and harmful eating patterns.

Why do people cyberbully?

There have always been people who choose to behave like a bully and those who are unfortunate targets. But what is it that makes one not just choose to bully another online, but to engage in the act in such a relentless and cruel manner?

One theory is that cyberbullies have difficulty feeling empathy for others. Low empathy has certainly been attributed to increased use of technology and less real-world social interaction. But this is only one facet of the cyberbullying problem.

Cyberbullying also allows a bully to feel more powerful. Through the use of technology, a cyberbully can easily and effortlessly unleash a torrent of torment at any time, all from the safe harbor of their own home, with little concern or repercussions. A lack of parental monitoring is another contributing factor, as is the desire to achieve popularity through acts they feel resonate well with their peers and associates.

Regardless of the reasons, cyberbullies sometimes face their own dark futures. Studies show that kids who bully others are more likely to abuse drugs and alcohol, engage in fights and criminal behavior, drop out of school, or be abusive toward their romantic partners and/or their children.

Even the bystanders and witnesses are not immune to the effects of cyberbullying. They may also have an increased likelihood of experimenting with drugs and alcohol at an early age or suffering emotional distress and mental health problems.

As an interesting side note, one study states that cyberbullying is more likely to occur between current or former friends. The report further states that cyberbullying occurs seven times more frequently among teens who know each other than among people who had never been friends or dated. This often occurs due to a simple argument that escalates. Or it could simply be because one person has a secret about another that they are dying to tell. It could also be a case of revenge in response to some transgression the bully feels was committed. Jealousy is another factor, as is the desire to improve their social standing.

In many of these cases, girls are twice as likely as boys to be victims of cyberbullying. And because the bully and the victim were once friends, it often results in the effects of cyberbullying being much more traumatic.

What can parents do about cyberbullying?

Unfortunately, there is no quick, one-size-fits-all solution to the cyberbullying problem. But, at the very least, as parents, you can be there for your children. It is highly probable that your child will not be forthcoming about any incidences of cyberbullying they may be experiencing.

However, if you recognize any of the signs described above, take the time to sit with your child and attempt to coax them to open up about any problems they are having in or out of school. By being supportive and understanding, you may aid your child in feeling as though they are not wholly alone.

Try to instill a sense of understanding that, as harsh and cruel as the bullying may be, the bullying is not a reflection of your child’s worth, but rather it is more representative of the issues the bully may have in their own life.

Understandably, a child is not going to be very receptive to that train of thought, but that is not your only recourse. The first step is to make every attempt to adjust the privacy settings on your child’s social media and chat accounts and to block any known cyberbullies.

Next, gather all evidence of cyberbullying, being sure to take screenshots, since many posts can be deleted. Report incidences of cyberbullying to the app or platform administrators, since cyberbullying often violates the terms of services.

If cyberbullying contains any threats of physical violence, it can also be reported to your local police department.

Finally, find ways to help your child heal emotionally. You may need to engage the services of a mental health professional. Do not simply dismiss the effects of cyberbullying or consider them over if the cyberbullying stops. The effects can be long-lasting, and if the cyberbullying has been severe, it may take more than your kind words and advice to rectify the damage that has taken a toll.

Today’s technology also comes with a number of parental controls to help safeguard kids from harmful or inappropriate online material. You can also avail yourself of third-party apps such as Kaspersky Safe Kids, which offers protection from harmful content, as well as enables you to set screen time limits, monitor their online activity, or track their location with GPS.

The digital landscape can be a vast and harsh environment. It is filled with adult content that can be discovered all too easily by curious youngsters. With Kaspersky Safe Kids, you can easily block your children from accidentally (or purposefully) viewing adult content while also ensuring they don’t spend an unhealthy amount of time online.

Remember, it can be a very small step to go from what is intended to be a harmless joke to a full-blown cyberbullying campaign. The lack of face-to-face interaction and the feeling of power one gains from sitting behind a computer screen can turn what might normally be a traditional case of schoolyard teasing into a steady onslaught of harassment, shaming, and threats of bodily harm. The impact can leave lasting emotional harm and, as mentioned above, lead to suicide.

If you suspect your child is a victim of cyberbullying, don’t wait until it’s too late. Don’t be afraid to broach the subject with your child for fear that they will repel your attempt to help. Cyberbullying affects all types of children, in all facets of society. Campaigns, legislation, school administrative programs, and other movements to recognize and stop cyberbullying are a good first step toward tackling this problem. But only you, as a parent, can directly offer advice and assistance immediately.

What are the effects of cyberbullying?

Mac security: A comprehensive guide to securing your MacBook

MacBook hacking: How to know if your Mac has been hacked

How to prevent cyber attacks