Cybercrime is a funny business. The common element in cybercrime operations is that attackers enjoy virtual anonymity and a low chance of detections. And like most kinds of thievery, it attracts different kinds of people who use their own methods and tactics and have their own motives for getting involved. And it appears that there are strong regional variances in the way that Internet users perceive cybercriminals’ activities.

For the large majority of cybercriminals, money is the prime motivator. Or, more precisely, easy money. The risk in cybercrime is relatively low compared with that of other criminal ventures in the physical world, and that’s an attractive prospect for aspiring hackers, many of whom possess more avarice and guile than technical skill. Only these criminals know their true motives and why they do what they do, buta new poll on the worldwide Kaspersky Lab Facebook pages shows that the criminals’ intended victims believe that most of the attackers are just in it for financial gain.

Nearly half of the 5,000 respondents to the poll said that they think cybercriminals do what they do mainly for the fat profits that are available. Behind the numbers, though, there are some interesting regional differences in attitude toward cybercriminals’ motives. In Germany, the huge majority of people–more than 65%–said they thought people turn into cybercriminals because of the possibility of making money. The same was true of respondents in the United States, with 63% of people saying money was the root cause of cybercriminals’ actions. 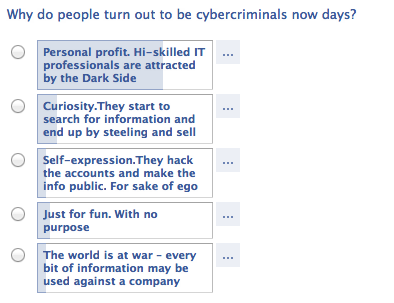 Meanwhile, attitudes in Japan are somewhat different. There, respondents were split nearly down the middle between thinking that personal profit was the main objective and thinking that curiosity was what got cybercriminals started.

Brazil, too, had some interesting results. In a country that is known as a source of many cybercime operations and helped popularize phishing, 64% of people said they thought curiosity, and not profit or simple fun, was the main reason cybercriminals get into the game. That also was true in Russia, where 55% of people thought curiosity is what motivates attackers at the beginning.

The motives of criminals are always murky, and that’s perhaps more true on the Internet than anywhere else. But as far as the general population is concerned, it all comes down to money, as it usually does.

Google’s Android operating system far and away dominates the mobile market with more than 68 percent of devices running the open source OS, according to research firm IDC. Whilst this