According to Kaspersky Labs research, 34 percent of worldwide Internet users were attacked by malicious programs in 2012. As always, the most popular entries for attackers were widely used programs like Java, Acrobat Reader and Internet Explorer. But as we increasingly access online information through different means — smartphones, iPads, apps, etc. — attackers are altering their craft just as quickly to keep up with these changes in user behaviors. The threats that we face as users are found on every connected device and are more advanced and versatile than ever before. 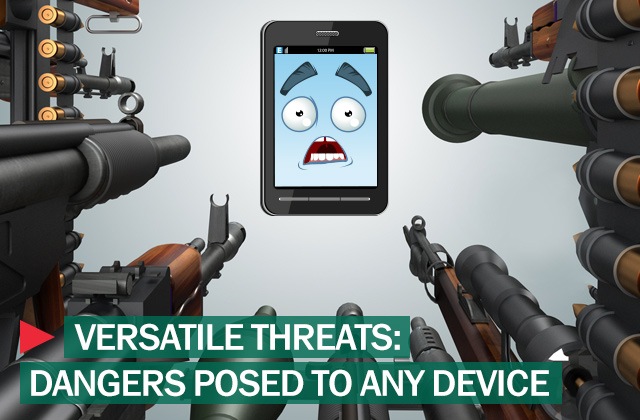 Multiple OS Threats: It used to be that malware programs were designed for specific operating systems. It also used to be the case that Windows was targeted far more frequently than Mac OS. Neither is as true as it used to be. Newer threats like the Morcut Trojan disguise themselves as applets or plugins and can download onto any system because they contain scripts appropriate for each and, once activated, they identify the operating system in use and inject the respective version of their malicious code. And after years of Macs being virtually free from threats, Apple products are now highly targeted: Kaspersky Lab’s antivirus experts created 30 percent more signatures to detect Mac Trojans in 2012 than they did in 2011. Among the most popular Mac malware programs are Trojan.OSX.FacCo.a and Jahlav, both of which are Trojans that disguise themselves as video codecs that actually are programs that steal user data and download more malicious programs.

Mobile Devices: Nearly all mobile malware in 2012 was created to exploit devices running the Android platform, at least in part because there are more Android devices are sold than iOS. but it is also because It is also because Google’s open approach to app sales opens a wider door for attackers than Apple does. There’s another problem with Android: a lot of legitimate Android apps work with ad networks that are that are shady at best and malicious at worst, accessing personal information like emails and phone numbers.

Mobile malware programs can be used to access user emails, steal address information from their phonebooks, use geolocation to track users, activate their cameras to facilitate identity theft, and even take over the phones, making them one more tentacle in massive global botnets.

That doesn’t mean that the App Store is free of malicious apps — the first suspicious application, called Find and Call — a program that sought user’s email and phone number to inundate them with spam — was detected in July, 2012.

Whatever the platform, these threats can escalate from annoying spam to identify theft. Mobile malware programs can be used to access user emails, steal address information from their phonebooks, use geolocation to track users, activate their cameras to facilitate identity theft, and even take over the phones, making them one more tentacle in massive global botnets.

And it’s not just smartphones that are the targets of attacks — tablets and smart TVs are also being attacked.

Usual Suspects: Traditional forms of spamming such as phishing that most online users have caught on to are growing in popularity on mobile devices, because what is more readily visible and identifiable as a scam on a large laptop or PC screen is harder to decipher on a small, handheld monitor — and because the address bar is rarely seen on mobile applications. Playing into this is the use of online-oriented scams — like fake emails from banks or travel sites — as well as social media sites like Twitter, where attackers can create enticing links — and disguise them with url shorteners like bit.ly — that unwittingly send users to harmful sites.

Kids Stuff: This new wave of versatile threats can target children, and can also utilize their carelessness to spread malware.

Apps like those from Facebook, Foursquare and Yelp that let users ‘check in’ to various locations offer geolocational information that can put anyone at risk, but especially children — especially when those posts are made in tandem on Twitter.

As many parents have found out the hard way, giving kids access to mobile devices and their related app stores can have pricey implications when kids download apps that aren’t free. They can also be sucked in by ‘free’ games that are free to download, but then require payment for tools to help them advance further.

Your old good antivirus for Windows cannot cover all those threats, and traditional approach to protection just doesn’t work in this multi-device, home networked world. That’s why you have to consider protection solution that covers all your devices, and you network as a whole.

How PayPal users get scammed

We’re continuing to watch how law enforcement agencies around the world are progressing in the fight against cybercrime. They’ve been able to keep jailing hackers, both for minor cybercrimes like