Those users who are truly willing to protect their systems and data from the latest threats frequently come to a conclusion that security can be enhanced by installing two/three/five antiviruses produced by different vendors. After all, ‘Four eyes see more that two’, as the proverb goes. Does this saying work with regards to cybersecurity? 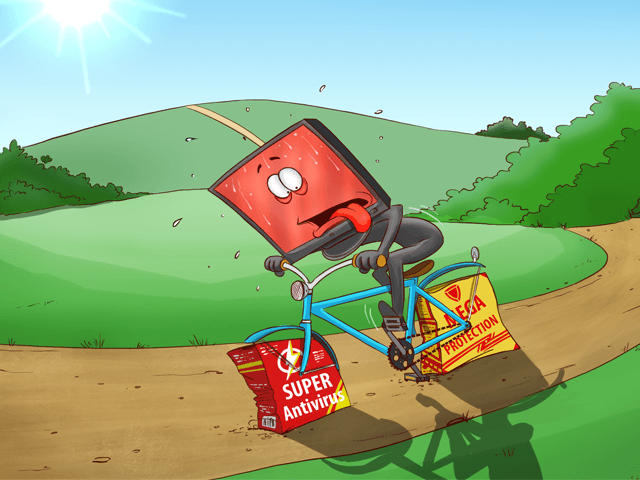 I’ll put it very straight: no! And it is not just about the competition on the antivirus market. Several antivirus solutions installed on one PC won’t come together due to purely technical reasons, even if created by the same company.

Firstly, several antiviruses acting simultaneously mean inevitable system resource conflicts. Each of the antiviruses seek to gain control over a long list of operations: establishing network connection, writing files, and alike, thus, ‘arguing’ over Windows functions they get in each other’s way. The consequences may vary: from slowing down the system to making it absolutely inoperable or even knocking down both antiviruses, which is, well, bad.

Do two #antiviruses provide double protection? On the contrary, the level of #security goes down. Pick up one! #tip

I used to see a lot of users complain on their systems’ slow operation. Traditionally, they claimed the root of all evil is our product, whereas on examining the problem in detail, it turned out that they had installed several antiviruses by practically all major market players. To solve this problem, a user must pick only one solution of choice (more likely, it would be a vendor whose license the user purchased) and get rid of all the rest.

Moreover, there are frequent cases of one antivirus detecting the competing antivirus’ files as infected. It is not done on purpose; it boils down to the fact that any antivirus carries out a lot of ‘suspicious’ (from other antiviruses’ point of view) activities, like controlling other applications. Actually, antivirus files are safe, and all AV developers try to keep false positives down, but at times white lists are not complete enough.

Kaspersky Lab products are also not functional with third-party antiviruses.

Kaspersky Lab products are also not functional with third-party antiviruses. Here’s a list of applications not compatible with Kaspersky Internet Security As you can see, all other vendors’ solutions and other Kaspersky products, are on the list, together with Microsoft and a number of no-name antivirus scanners and anti-banner plug-ins.

The list of incompatible solutions is divided in two parts. The programs in the first part of the list are easily deleted by Kaspersky Lab Installer. To avoid the aforementioned problems, I strongly recommend you to accept this inviting offer. The uninstallation process will launch automatically.

The second part of the list features products which our installers cannot delete on their own. If all incompatible programs have been identified, yet the Kaspersky installation cannot be completed, check whether any of the programs from the second part of the list are installed in your system. Should the search results bring such programs to your attention, you know what to do.

Before installing an antivirus, delete the previous antivirus with help from its own uninstall utility.

However, it may well be that deleting an incompatible program by means of your system’s stock capabilities is not possible. To handle such occasions, each vendor provides a proprietary uninstall utility. In cases where you know which antivirus was previously installed on your PC, try downloading the uninstall utility from the vendor’s official website and run it. For your convenience, we collected uninstall utilities of all major antivirus producers on one page in our Knowledge base.

I specifically wanted to bring the following example to your attention. A user decides his PC is infected with malware. Maybe he paid attention to some suspicious entry in the antivirus log, or the system showed some weird behavior. Frequently, in such circumstances, a user tends to make a big mistake by installing free/trial versions of several security solutions to manage the threat. As a result, in an hour’s time, the PC slows down due to several antiviruses working simultaneously, while the suspected malware is still at large. It happens so that only the system restoration can help to bring the PC back to life. Hence the conclusion: don’t you ever do that!

“But what should I do?” you ask. As a priority, I would recommend to restart the system in the Safe mode and run a complete scan with the antivirus already installed on your PC. If you are sure the virus hides in the very depth of your operating system, this approach might work. If the complete scan did not yield any results, before you go for installing ten antiviruses, I recommend you to get in touch with the service support team at the company which produced your antivirus. I am positive that they would offer the safest way to solve the problem. It might come as a paradox, but very often in such cases, no viruses are present in the system.

To wind it up, I would decipher the proverb I mentioned above: “One antivirus is good but two is bad!”