Google Glass was among the main attractions at the Mountain View, California search giant’s developer-centric I/O conference in San Francisco last week. We had high hopes that Google would address the substantial and pervasive privacy implications of a head-mounted computer that sees everything its wearers see, but it remained the elephant in a convention center that hosted sessions on everything from “Autoscaling Java” (whatever that means) to indoor mapping. There was one mention of privacy on the Google I/O Sessions page; it was a link to Google’s privacy policy. 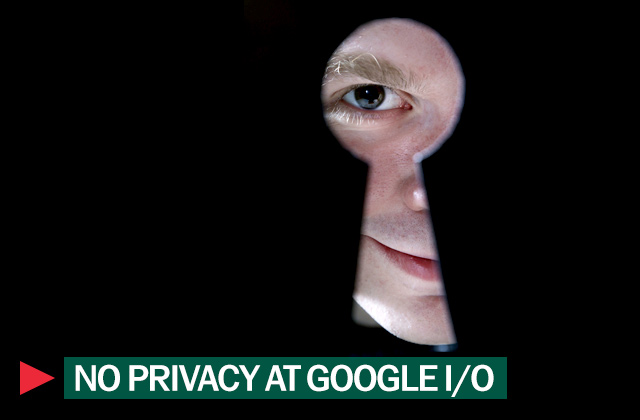 At the 2012 edition of Google I/O, security and privacy got a whole hour in the “Security and Privacy in Android Apps” session, which seemed modest at the time, but looks fairly indulgent now that we’re left digging through all the presentations to see if there was even a mention of privacy this year.

Luckily, there were two telling mentions of privacy at the event: one in a Google Glass fireside chat and another anecdotal mention from Google’s top brass.

Perhaps not surprisingly, the best privacy discussion was prompted by an audience member in a Google glass session. According to our friends at the Verge, when an audience member asked Google Glass’s product director, Steve Lee, about the privacy implications of the wildly anticipated product, Lee downplayed concerns, claiming, not encouragingly, that it is easy to tell if someone is recording you with their Google Glasses and that the user-privacy was at the forefront of the product design team’s thinking as they developed Google Glass.

It’s possible that Google’s new privacy strategy is to deflect, denigrate and downplay until no one cares about personal privacy anymore: a policy behooving to any organization attempting to build an empire upon data.

In a truly shocking departure from the norm, the United States Congress seemed to mirror public sentiment when they penned a letter to Google CEO and co-founder, Mr. Larry Page, expressing concerns about the new product’s impact on user- and non-user-privacy, and demanding answers to some pretty tough questions. Page must provide answers to these questions by July 14, which will give us a far-clearer view into the real privacy implication of the yet-to-be-released computer-spectacles.

It might be slightly unfair to say that Google scoffs at user-privacy just because they didn’t host any privacy talks at a yearly conference that is really about teaching developers how to optimize Google’s resources, tools, and gadgets in order to make better applications and other Web services. Also, in Google’s defense, the tech company received very high marks in the Electronic Frontier Foundation’s 2013 “Who Has Your Back?” report. However, Page made it a whole heck of a lot easier to criticize Google on privacy, which is saying a lot, because privacy-hawks have been taking Google to task on its handling of user-data for years. The CEO and co-founder took the stage at I/O, and seemed to suggest that because he blogged about some nerve issue that paralyzed his left and later his right vocal cord on his Google Plus account, that everyone needs to be less uptight about the privacy of their medical records.

There is no way to know for certain if Page’s views on medical privacy reflect his views on personal-data privacy, but it’s no-less interesting to hear such a pivotal character in the privacy debate advocate for openness with regards to medical history. To his credit, he seemed to be trying to say something about the potential for technological and medical advances that would be achievable with such openness.

Of course, it may have taken some courage for Page to come forward with this, but a billionaire publically talking about a non-life-threatening condition that affects the way he speaks is one thing, while allowing public access to the medical records detailing commonly stigmatized, communicable, or deadly conditions is another thing altogether.

It absolutely rocked the world in 1991 when Magic Johnson publically announced his retirement after contracting HIV. In retrospect, Johnson’s announcement was overwhelmingly good, but Magic Johnson was perhaps the greatest basketball player to have ever played the game to that point. The reaction to Johnson’s announcement ranged from incredibly positive to equally negative, but the reality is that he never needed to work again. Not all of us have that kind of job security. Crippling post-traumatic stress or anxiety disorders or any number of other ailments aren’t necessarily things you want a potential employer or school admissions officer to know about before you even get a chance at an interview.

It’s entirely possible that Google has the best of intentions for Google Glass (and Android for that matter) or that Larry Page means well when he says he wants us to be more open about or medical history, but it’s also possible that Google’s new privacy strategy is to deflect, denigrate and downplay until no one cares about personal privacy anymore: a policy behooving to any organization attempting to build an empire upon data.

Tell us what you think this all says about privacy in the comments.

We want you to be fully aware of the latest changes in the threat landscape. Our friends at securelist have compiled a quarterly report of digital threats and we’ve included