Today is the International Day of Human Space Flight, and we’ve decided to tell you a little about computers in space: what they’re like, what they do and how and why they need to be protected. 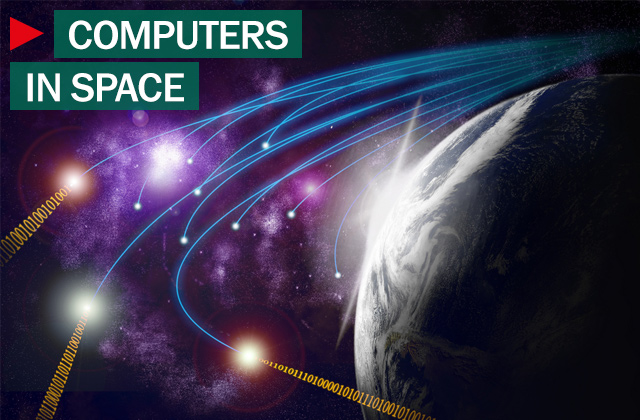 The level of spacecraft computerization is constantly growing, just as in all other aspects of our lives. Huge blinking control panels are being replaced by laptops which can be connected to any place on the International Space Station (ISS) mainframe and enables the crew to access necessary data, or input instructions. Of course, these aren’t your regular laptops and computers, though off the shelf computers are being used more frequently nowadays, they still have some captivating features.

Design
An outsider would be quite unimpressed by the modern spacecraft control unit; come to think of it, he wouldn’t be impressed by the old one either. It’s a plain-looking heavy metal box with a couple of colored sockets. That’s it. There’s no USB, no display, sometimes there’s even no keyboard. In fact, it looks quite old-fashioned. It’s all due to the fact that system reliability is the first priority.

There’s no USB, no display, sometimes there’s even no keyboard. In fact, it looks quite old-fashioned. It’s all due to the fact that system reliability is the first priority.

Thanks to modular design, each unit, whether it’s a processor, a memory chip or an input-output system, can be easily taken out and replaced by a new one. Such design enables quick and easy maintenance, which is essential in spacecraft equipment because space radiation affects electronics and can cause malfunctions. There are a lot of computers at the ISS. Some of them are mounted on the outer shell and in order to repair them the crew needs to work in outer space. In the course of one year about 20 computers need to be repaired.

Performance
The most common type of hardware used at ISS today is Intel 80386SX which was widely used in home PCs twenty years ago. Its performance is unspectacular compared to modern processors. However, one can argue with that view because huge computing power these days is mainly used for amazing game graphics and interface renderings. The basic tasks in space can be solved through modest means. After all, they managed to plan lunar expeditions back then.

The main reason the space computer is “outdated” is the vast amount of time that is spent on creating one. Sometimes it takes up to several decades. A future expedition’s list of objectives is devised along with the necessary technical features of a projected computer; it is all done with modern and time-tested technologies in mind. An older CPU has another benefit – it doesn’t draw a lot of electric power, because every watt counts.

The simpler, the better
Although the spacecraft itself is a very complex and sophisticated machine, its control system is quite simple and consists of basic units which can perform a very limited number of operations. The less the computer module can do, the more stable and reliable it is, and it is much easier to solve arising problems, if any.

The software is more predictable as well. Real-time operating systems are used, which don’t have much room for “speculation.” This ensures an instant, reliable response from the system. Unlike Windows, which tends to “think” for quite some time, space RTOS don’t waste time buffering. Specific spacecraft software is also designed not to waste the system resources, whether it’s a RAM or CPU load.

Patches, updates and debugging
There’s no such thing as a perfect software application and an error in the code can slip through numerous checks. The affected computer being thousands, or in the case of space probes, millions of miles away doesn’t make debugging easier. That is why the best way to tackle the problem of software errors is to run a simulation on a complete replica of the space computer here, on Earth. Just recently this method was used to “reboot” space probe Voyager 2, which was launched 40 years ago and is rumored to have left the Solar system by now. In 2010, due to hardware malfunction, it started transmitting random signals instead of coherent data. Fortunately, a second of this kind of computer is kept in the Voyager 2 lab in NASA; running a simulation of the problem, NASA specialists realized the issue was caused by a damaged memory sector. Therefore, a patch (a software update which corrects issues) was sent to Voyager 2 through the radio. Thus repaired, the spacecraft resumed transmission from deep in space. It may continue transmission for the next 40 years, until it reaches the signal limit. Or until it’s apprehended by aliens.

Mars exploration rover Spirit has recently undergone a similar treatment. So it’s not only your home computer that needs maintenance and constant updates.

The system is not much different from backups used to preserve your favorite music and vacation pictures which have great sentimental value but are significantly less expensive than the data collected in space.

Information shouldn’t be lost
Space exploration is a very costly endeavor, regardless of whether it’s manned or unmanned. It takes a lot of time, money and people to set up. So even the tiniest glitch which results in data loss means that all those efforts have been wasted. In order to prevent such issues, space computers need numerous backup systems. Quite often different types of storage are used all at once for this purpose. For instance, flash memory can be used along with magnetic tape, so that at least one storage holds. The system is not much different from backups used to preserve your favorite music and vacation pictures which have great sentimental value but are significantly less expensive than the data collected in space. 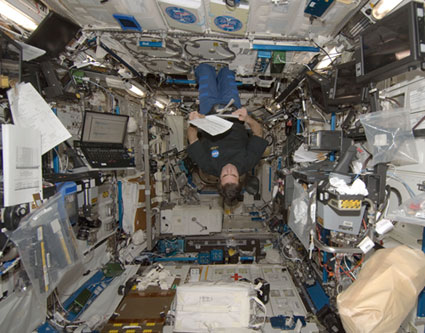 Modern times
Each member of the ISS crew has a laptop Lenovo ThinkPad which can be connected to different systems of the station via a special bus.

Thanks to modern technologies, astronauts today can surf the Web and talk to their families on Earth, but the communication channel is protected. There is a special protective buffer to isolate astronauts from the dangers of the web. Moreover, a separate computer is used for this communication and it’s not connected to any life-critical equipment of the ISS. This precaution has already proved itself effective – there was a “Gammima” malware discovered on an astronaut’s laptop during his flight in 2007.  Laptops were not protected by antivirus, but NASA started considering such protection after the incident.

Shop and bank online without worrying about the safety of your financial data – it’s protected by the multi-layered defenses of Safe Money technology included in Kaspersky Internet Security.