Roughly 28% of attacks occurred on weekends

Woburn, MA – February 13, 2020 – According to Kaspersky’s Q4 2019 DDoS attacks report, the number of attacks blocked by Kaspersky DDoS Protection in Q4 2018 amounts to only 56% of attacks detected in Q4 2019. Further investigation of botnet activity revealed that roughly 28% of attacks occurred on weekends, with the share of attacks on Sundays growing by two and a half percentage points, reaching 13%.

In Q4 2019, there were several large-scale DDoS attacks including those against financial institutions in South Africa, Singapore and Scandinavian countries. DDoS cyberattacks were also targeted at the Labour party in the United Kingdom as an attempt to disrupt its digital systems, as well as against Minecraft servers set up in the Vatican. This demonstrates that DDoS is still a common attack method among cybercriminals driven by ideological motives or seeking financial gain, and organizations should be prepared for such attacks and have a deep understanding of how they evolve.

The report highlights that the main trend during the last quarter of 2019 was increased botnet activity on Sundays. While the growth may seem relatively small, the share of DDoS attacks on this particular day of the week has historically been the lowest and most consistent throughout the year (around 11% of attacks in Q1 and Q3, and 10% in Q2). 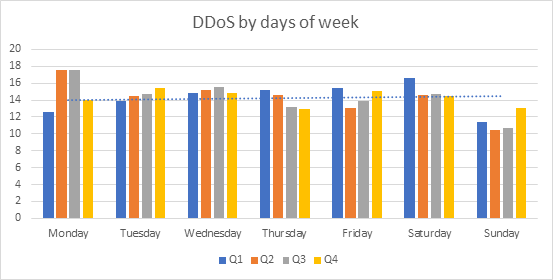 Distribution of DDoS attacks through week in 2019

Although the number of DDoS attacks detected by Kaspersky DDoS Protection has grown significantly compared to Q4 2018, the growth in comparison to Q3 2019 is only marginal (attacks in Q3 2019 equate to 92% of Q4 2019). There was a more notable rise in “smart” DDoS attacks, focusing on the application layer and carried out by skilled malefactors (as attacks in Q3 2019 were 73% of those in Q4 2019). This increase was easy to predict as November and December are traditionally a popular time for online business and retail activity. This year, however, Kaspersky experts did not identify a spike of DDoS attacks on Black Friday or Christmas holiday sales days.

“Despite significant growth in general, the holiday season turned out to be quieter than expected,” said Alexey Kiselev, business development manager of Kaspersky DDoS Protection. “We suspect that we didn’t see a storm of attacks on certain days because companies expanded their activity to engage with customers for the entirety of the holiday period, so there was no need for cybercriminals to launch an attack to coincide with a specific event. However, attackers can still find a way to spoil your leisure time, as cybercrime is not an ordinary nine-to-five job. With that in mind, it is important to ensure that your DDoS prevention solution can automatically protect your web assets.”

For more information, please read the full report on Securelist.