Woburn, MA – April 1, 2019 – New research from Kaspersky Lab has found that cybercriminals are actively using episodes of popular television shows to distribute malware to fans. “Game of Thrones,” “The Walking Dead” and “Arrow” are the shows most frequently used by attackers as a disguise for malicious files.

Television shows are a universal form of entertainment, and with the rise of online streaming, torrents and other methods of digital distribution, viewers are now able to access TV shows without having to tune in live. In many regions, popular programs are also consumed via illegal channels, such as torrent-trackers and unauthorized streaming platforms. Unlike legitimate resources, torrent trackers and hosted files may prompt a user to download a file that looks like an episode of a TV show, but is in fact malware with a similar name.

Seeing how easily TV shows downloaded from illegitimate resources can be replaced with malware-carrying versions, Kaspersky Lab researchers took a closer look at such compromised files from both 2017 and 2018. In both years, “Game of Thrones” led the list of TV shows targeted by cybercriminals to use as a disguise for malware. In 2018, the show accounted for 17 percent of all infected pirated content, with 20,934 attacked users.

This is despite the fact that in 2018, there were no new episodes of “Game of Thrones” released, while the other top shows in the rankings were promoted with high profile marketing campaigns. “The Walking Dead” was the next most popular show, with 18,794 users attacked, followed by “Arrow,” with 12,163.

In every case observed, the malware distributors focused on targeting the first and the last episode of each season, with the launch episode the most actively used. For example, the “Game of Thrones” Season 1 episode “The Winter is Coming” was the most commonly targeted episode of the show. 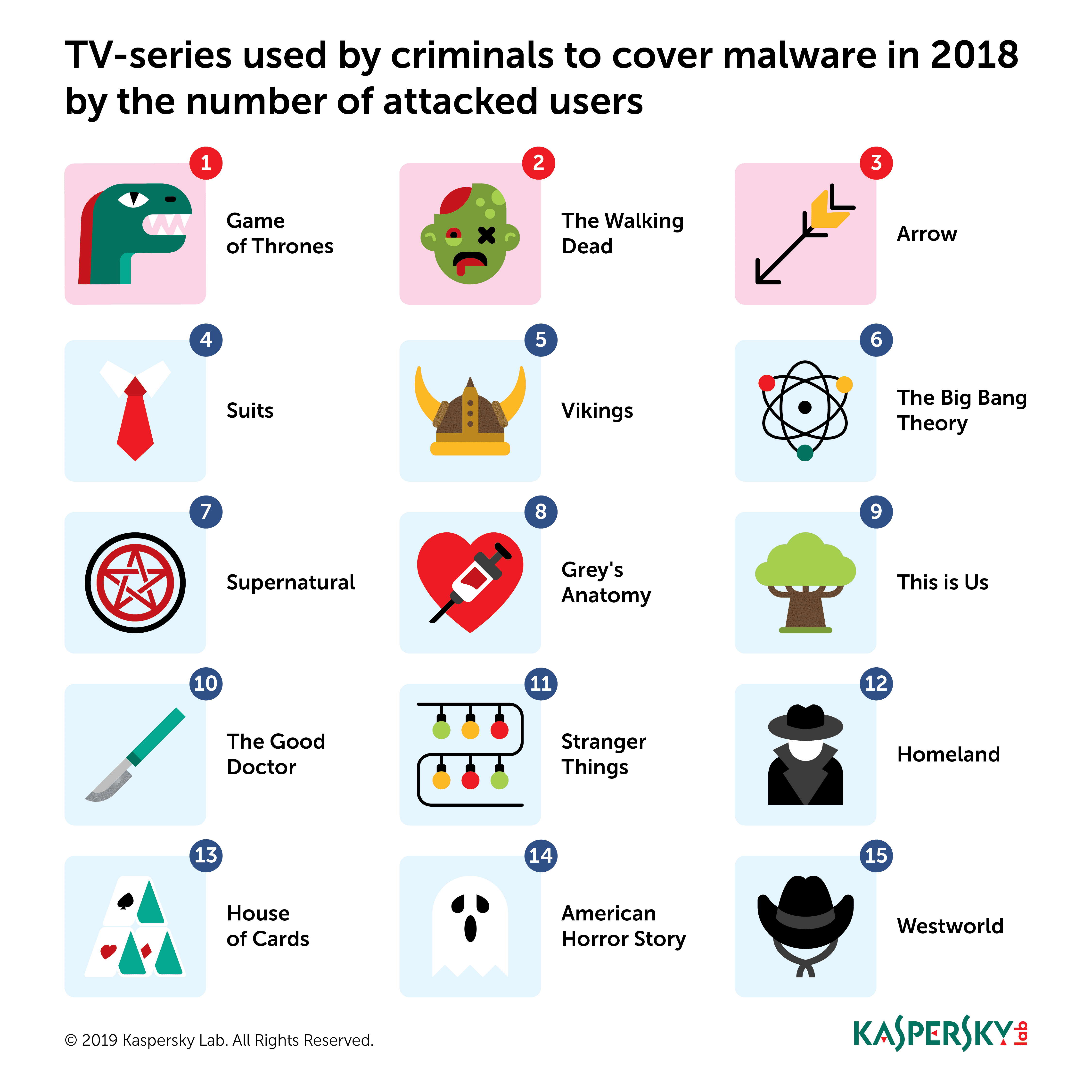 “We can see clearly that malware distributors exploit TV shows that are in high demand on pirated websites; these are usually actively promoted dramas or action series,” said Anton V. Ivanov, security researcher at Kaspersky Lab. “The first and final episodes, attracting the most viewers, are likely to be at greatest risk of malicious spoofing. Online fraudsters tend to exploit people’s loyalty and impatience, so may promise brand new material for download that is in fact a cyberthreat. Keeping in mind that the final season of ‘Game of Thrones’ starts this month, we would like to warn users that it is highly likely there will be a spike in the amount of malware disguised as new episodes of this show.”

The full text of Kaspersky Lab’s report, “Game of Threats: How Cybercriminals Use Popular TV Shows to Spread Malware,” is available on Securelist.

Kaspersky Lab is a global cybersecurity company, which has been operating in the market for over 21 years. Kaspersky Lab’s deep threat intelligence and security expertise is constantly transforming into next generation security solutions and services to protect businesses, critical infrastructure, governments and consumers around the globe. The company’s comprehensive security portfolio includes leading endpoint protection and a number of specialized security solutions and services to fight sophisticated and evolving digital threats. Over 400 million users are protected by Kaspersky Lab technologies and we help 270,000 corporate clients protect what matters most to them. Learn more at www.kaspersky.com.

Kaspersky
Illegally streamed episodes of Game of Thrones, The Walking Dead and Arrow used by cybercriminals to deploy malicious files