The number of users attacked by ransomware targeting Android-based devices has increased four-fold in just one year, hitting over 136,000 users globally

Woburn, MA – June 29, 2016 –Kaspersky Lab has found that the number of users attacked by ransomware targeting Android-based devices has increased four-fold in just one year, hitting over 136,000 users globally. A report on the ransomware threat landscape, conducted by the company, also found that the majority of attacks (90%) were based on only four groups of malware. 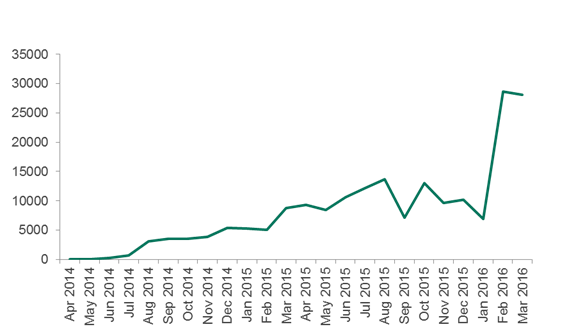 Ransomware is a type of malware that blocks access to information on a victim’s device by locking the screen with a special window or encrypting important files, and then extorts money. It is not only PC users who are in danger of ransomware attacks, but also owners of Android-based devices. Unlike the threats facing PCs, where crypto-ransomware is skyrocketing, Android ransomware is mostly in the form of screen-blockers. This is due to the fact that Android-based devices can’t remove screen lockers with help of external hardware, making mobile screen blockers as effective as PC crypto-ransomware.

Although the actual number of users attacked with ransomware is lower and the rate of growth slower than that seen for PC ransomware, the situation with Android ransomware is of concern. At the start of the comparison period, the monthly number of users who encountered this type of malware on Android devices was almost zero, but by the end it had reached nearly 30,000 attacked users per month. This clearly indicates that criminals are actively exploring alternative opportunities to the PC and show no signs of moving on.

“The extortion model is here to stay. Mobile ransomware emerged as a follow-up to PC ransomware and it is likely that it will be followed-up with malware targeting devices that are very different to a PC or a smartphone,” said Roman Unuchek, mobile security expert at Kaspersky Lab. “These could be connected devices like smart watches, smart TVs, and other smart products including home and in-car entertainment systems. There are a few proof-of-concepts for some of these devices, and the appearance of actual malware targeting smart devices is only a question of time,” he added.

In order to protect yourself from mobile ransomware attacks, Kaspersky Lab advises the following measures:

Kaspersky Lab is a global cybersecurity company founded in 1997. Kaspersky Lab’s deep threat intelligence and security expertise is constantly transforming into security solutions and services to protect businesses, critical infrastructure, governments and consumers around the globe. The company’s comprehensive security portfolio includes leading endpoint protection and a number of specialized security solutions and services to fight sophisticated and evolving digital threats. Over 400 million users are protected by Kaspersky Lab technologies and we help 270,000 corporate clients protect what matters most to them.

Kaspersky
The number of users attacked by ransomware targeting Android-based devices has increased four-fold in just one year, hitting over 136,000 users globally