In July, Kaspersky Lab published its latest relevant reads and need-to-know security news. From protecting your webcam and your privacy, to keeping kids safe online, we kept you in the loop. If you missed any of our July posts, don’t worry! Our monthly roundup will get you up to speed. 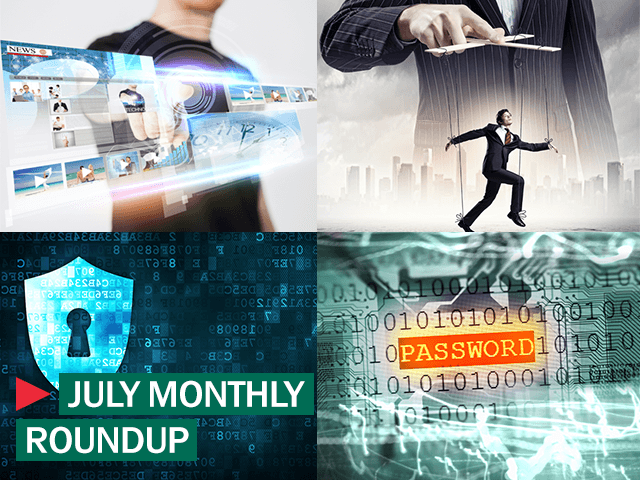 Millions of Smartphones Vulnerable to Rouge Hotspots by Default

Fun fact: the mobile service provider AT&T puts default lists of trusted Wireless networks into its customers’ iOS and Android devices. This means that users will conveniently, automatically connect to a variety of Wi-Fi hotspots managed by AT&T. Comcast’s XFININTY is also in the business of disseminating wireless hotspots for its customers. Their Internet service is in the process of rolling out a feature called “XFINITITY WiFi”, which will rely on the modems and routers of its users to fuel the Internet for your home and private network, while simultaneously acting as a public hotspot to others with XFINITY credentials. Despite the convenience of automatic connection to public hotspots, the problem is that once you connect to one of these, it appears your device may automatically connect to any other hotspots you come across that broadcast the same network name and SSID. How do you really know how secure these hotspots are? The increasingly Wi-Fi-enabled world in which we operate is conducive to attackers who could set up rogue or malicious Wi-Fi hotspots in order to monitor Internet communications, pilfer login credentials, infect users with malware, or perform other malicious actions. We suggest avoiding public Wi-Fi altogether and running a solid security product for protection in the eventthat something goes awry.

In the last decade webcams have become so commonplace that the phenomenon of seeing someone as you speak with them tens or thousands of miles away has gone from a mere pipedream to an everyday reality that can take place in the palm of your hand, courtesy of your smartphone. The scary truth is that you are not the only one that can access your webcam. Aren’t convinced? Just ask Miss Teen USA 2013, whose webcam was hacked into and used to take nude photos of her.  Attackers with programs like Blackshades, which was cracked down on earlier this year, can essentially hack their way into your computer and use your camera at will. Although this is a serious concern, our poll indicates that more than half of users don’t protect their webcam. Some 40 percent do think to cover their webcams with duct tape, a Band-Aid and so on, but there are better ways to protect your privacy. For example, Kaspersky Internet Security makes it near impossible for invasive malware threats to turn users’ webcams against them by alerting users whenever an application attempts to access the webcam and has permissions setups that allow for certain programs like Skype or Hangouts to have access while denying all others unless expressly granted permission by the user.

Ten New Security Tricks to Protect You This Year

Criminals are constantly inventing new tricks to steal your money or your data, or even hold it hostage, making it increasingly more complicated to protect your computer or mobile device from online threats. It is no wonder that the security industry must continually innovate. Below is a brief list of new protection technologies that counteract fresh (not to mention, scary) tricks of hackers in 2014, all of which will be implemented in the 2015 version of Kaspersky Internet Security ―Multi-Device. The full article will explain the new protection technologies at length.

In this day and age of heavy digital reliance, it is critical that we keep our computers and mobile devices safe and running smoothly by using appropriate protection and avoiding threats. Here we combat 5 of the prominent myths and misconceptions of antivirus protection with a heavy dose of reality.

1. Myth: Viruses are only for Windows

Reality: While that may have rung true in years past, as Apple has gained traction both in private and public sectors, attackers have stepped up their attacks on those products as well. And now mobile malware is the next frontier for attackers, and once again they are prioritizing the dominant platform — Android — but are also targeting iOS devices. That means whether you have a Windows- or iOS-based based computer or mobile device, having a robust antivirus program is a must.

2. Myth: Process errors or poor computer performance means my computer has a virus

Reality: While those can certainly be signs that your computer has a virus, they may also be indicative of a system with too many background processes in action.

3. Myth: You can get all the antivirus protection you need from free programs downloaded from the web.

Reality: These free programs offer basic protections, but in order to be protected against phishing attacks that can steal your personal and financial data you need an Internet browser security program.

Reality: Cyber attackers are the ones creating the latest malware in a never-ending attempt to stay one step ahead of antivirus programs as they try to steal sensitive data and money from users.

Reality: It takes a diehard conspiracy theorist to believe computer viruses can infect humans. But anyone who has seen “Independence Day” knows it is a fact that viruses can be written to sabotage alien spaceships — that’s just science.

Smartphones became an integral part of our lives so quickly that many people still haven’t realized which threats came along with these smart pocketable helpers. For example malicious programs for smartphones are able to steal money, while the risk of data leakage is a constant. These risks are so significant that even those outside of the security industry have joined the fight. For example Google developers will be releasing the Android codenamed L, which will greatly improve the security landscape for this OS, which leads today in terms of mobile threats presence. For example, Android L-based devices will be less desirable and more difficult to steal with a factory reset option only available with legitimate credentials. Google will deliver most security updates directly to end users via its own Google Play services and applying those updates without a complete firmware update. The new Android for Work solution (which incorporates Samsung KNOX features) will address data leakage issues by creating an encrypted storage and a virtual environment, basically, a smartphone inside a smartphone allowing you to separate work functions and personal usage. Addressing privacy concerns, Google aims to render passwords obsolete by identifying a legitimate owner by other means, if it’s possible. For example, a lock screen could be disabled, if an owner’s smart watch is nearby, indicating that owner himself is close as well.  Lastly, Google developers plan to make for more privacy using Universal Data Controls, a centralized tool helping a user identify items like which apps, what kind of his/her personal data, and what should be blocked for an individual’s smartphone.

Kids and Computers- What Protection is Needed?

Raising kids in the digital age is no easy feat. Suddenly it becomes a parent’s responsibility to protect not only the computer, but also the child from various cyber threats. Here comes the paradox – kids are often more tech-savvy than their parents and it becomes tempting to trust the child with selection of proper protection measures. However, kids often advocate for basic or no security, claiming that some free malware protection is all they need. This is a classic mistake, because malware is just one of many existing online threats and others are more dangerous for kids. Other less-than-favorable content your teen might encounter surfing the Net includes:

If you use an Internet Security product equipped with parental control tools, and you spent some time to set it up properly, you can prevent these things from happening. An additional security concern—kids may turn off an antivirus solution for one reason or another. However, an active malware can be “killed” by a powerful security solution such as Kaspersky Internet Security.

Read highlights from our top #security news posts in July.

When every megabyte counts

Despite the fact that we have cheap unlimited Internet connection almost everywhere, there are situations when each megabyte is literally worth its weight in gold.