When you look at airplanes moving on a map, using some tracking service like Flightradar24, you get the feeling it’s sheer Brownian motion. It may look like an abundance of aircrafts moving to and fro up in the air, and that due to some unexplained miracle they do not clash. Of course, that’s not the case: what you’re witnessing is the highest level of safety, a well-known characteristic of aviation. 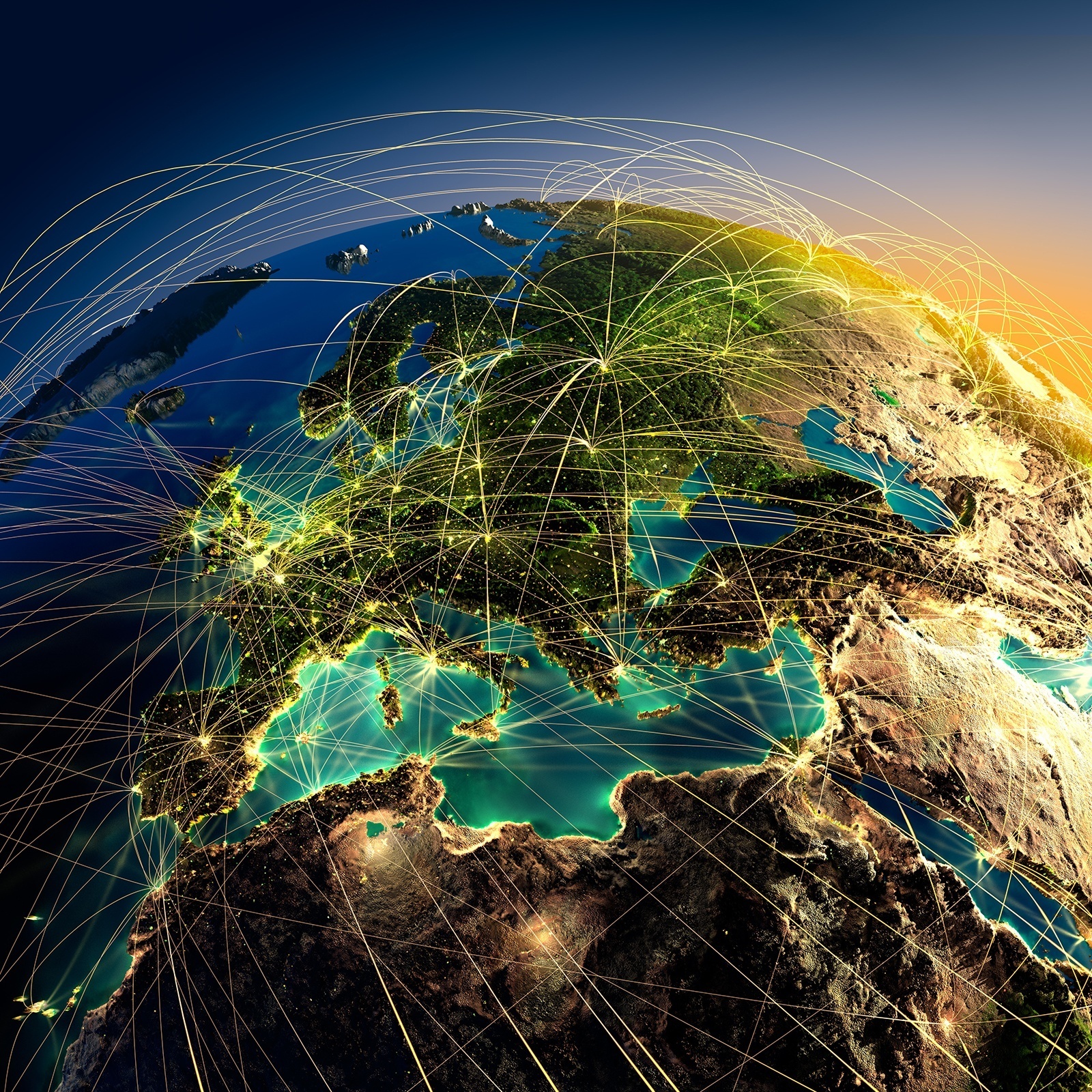 To start, let’s acknowledge the fact that planes keep to air tracks all the time. You might visualize this concept by recalling glowing airborne buoys which served to mark crossroads in Back to the Future Part II (by the way, it’s 2015 already, where are those hoverboards?). In this regard, the reality is not very different from science fiction: although there are no buoys, there are virtual spots on the map.

Any route from one airport to another goes through these air tracks; an airplane does not fly in a direct line, it moves from one spot to another

Certain geopositioning coordinates get their own names: as a rule, it’s a five-character combination of Latin vowels and consonants, which can be easily read aloud and memorized (for instance, OKUDI, PESOT or LISNA).

The letters themselves do not make much sense, apart from the cases when a combination reminds you of a certain populated location nearby.

Any route from one airport to another is going through these air tracks; an airplane does not fly in a direct line, it moves from one spot to another. On larger distances, this polyline-shaped route almost fits the direct line. The reason is simple: The shorter the distance, the less fuel is used.

Many people think the plane flies in a curvy line. At least on Flightradar the route is depicted as a curve, as well as on the onboard displays. There is no secret here: Earth is a sphere, whereas maps and monitors are flat. The closer the route is to a pole, the more this route-depicting line is distorted.

For instance, a route from Moscow to Los Angeles looks like a parabola on a map. But once you take a globe model and stretch a string between the two cities, it will become obvious that the plane’s real-life route is, in fact, very close to a line, which is the shortest distance.

However, transoceanic flights are a bit more complicated. With regards to four-engine aircrafts like Boeing-747 or Airbus A380, it’s all very simple: just fly the shortest way. For the rest, this approach would not work due to ETOPS (Extended range twin engine operational performance standards) certification. As per security reasons, two-engine aircrafts are not permitted to move far from terra firma when flying across the ocean.

It’s even a bit more complicated: two-engine aircrafts have to remain close to the nearest aerodrome which would be capable of accepting this particular type of aircraft. This rule adds up to the overall challenge in cases of large wide-body planes used on long-distance flights: not every runway would be a match.

The principle is as follows: In case of an engine failure, an aircraft would rely on the redundant engine to reach the closest alternate airport which would be fitted to accept it (if the redundant engine also fails, ditching the plane in the middle of the ocean is not the best idea).

Fortunately, modern aircraft are increasingly ETOPS-180 certified (which means they can go as far as 180 minutes of flight from the nearest aerodrome), or even ETOPS-240 certified, and the new Airbus A350XWB is going to be ETOPS-370 certified. So why mess with these things if you just can fly four-engine aircrafts? It all comes down to saving fuel. Four engines are bound to consume more fuel than two, as there is no such thing as 100% efficiency.

Air traffic is managed by dispatchers who watch for planes flying one after another on the same route, to make sure they don’t get closer than 5 km.

Even flight levels (300, 320, 340, etc.) are used for westbound flights, whereas odd flight levels (310, 330, 350 etc.) are for eastbound flights. That means there is at least 300+ meters of clearance in between planes flying on the same route in different directions. Some countries use a more sophisticated quadrant scheme (flight levels are divided between four and not two directions), but the principle is essentially the same.

Let me present a bit of insight about directions. Many people would note that the flight from Vladivostok to Moscow lasts a bit longer than the flight in the exact opposite direction. Some people explain this curio by referring to different routes on the way to and fro.

Some would think that the Earth spins in the same direction with the plane when it flies to Vladivostok and in the opposite direction in the case of Moscow-bound flight. Such people would need to attend nature study classes with second-graders to learn that atmosphere spins with our planet.

The reason, however, is simple: In the Northern hemisphere the winds from west to east prevail, so in the first case the plane flies with the wind, whereas in the second case it flies against the wind.

Highways in the #sky: how #aircraft routing works

Sometimes the wind can be so strong, that a four-hour flight from, say, Novosibirsk to Moscow would take five solid hours. Or even more: having missed its turn to land in the airport, the plane might spend some time in the queue until the dispatcher finds a free time slot to land this particular aircraft. For this purpose, there are special waiting zones not far from the airports: it is where the planes remain, circling at a small altitude, before they are allowed to approach and land.

#BionicManDiary entry 004: The one in which Star Wars turned to be much closer than in the galaxy far, far away

Using a biochip, Microsoft Kinect, a servo, and a bit of IT magic, we are going to make the imaginary idea of Jedi Force come to life in the real world!