You’re in the middle of doing something important on your computer when an annoying alert pops up telling you it’s time to perform a software update. However, instead of hitting update, you close out of the screen. We’ve all been guilty of doing this at one time or another, most likely given the inconvenience of having to restart before the task can be completed. Yet software updates are offered to us for good reason, they provide patches. They are necessary for our systems and we shouldn’t be ignoring them, but what are they and why are they important? Read on to find out. 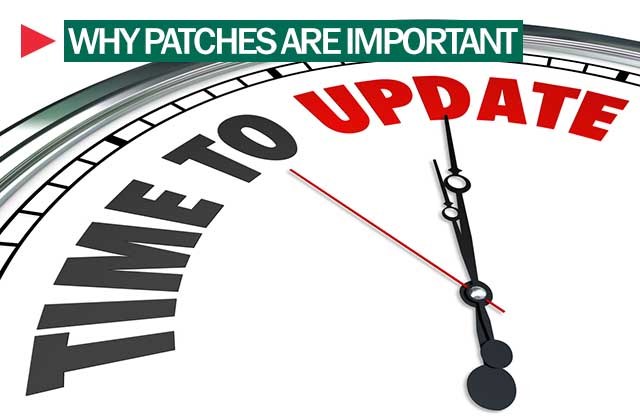 Patches are defensive measures that provide additional, revised or updated code for operating systems or applications to “patch” over any errors that have been found. You may be asked to perform an update to remove outdated features or to add new ones, to increase software compatibility and/or to fix bugs (otherwise known as security flaws). If a bug has been found within an application or software system, a patch will be released to quickly fix the issue before viruses, rootkits or malware have a chance to exploit it. So if you’re being asked to update, you should do so in order to ensure your security and to guarantee you’re working with the most efficient version of the platform available to you. Failure to do so could leave you not only with a slower system, but it could also leave you vulnerable to an attack.

Patches are defensive measures that provide additional, revised or updated code for operating systems or applications to “patch” over any errors that have been found.

In July, Tumblr, a popular microblogging website, experienced a major security breach in which iPhone and iPad users faced the possibility of having their passwords sniffed while gaining access the app over public WiFi. The breach was believed to have come from the company’s neglect to use an SSL server while logging users in, but once noticed, they urged consumers to change their passwords and to perform a software update to avoid having their personal data compromised. And just this past September, Apple was made aware of their own large vulnerability in the newly released iOS7. Shortly following the release, a soldier based in the Canary Islands discovered how to bypass the lockscreen, giving him access to users’ contact information and social media accounts. Soon after this exploit was found, Apple released a software update to rectify the problem.

We’re on a continuous path to keep you safe, so if an update is being offered to you, we urge you to act on it. There is no reason to put your security at risk by neglecting to accept new patches for any software or apps you’re using, including your antivirus, so keep yourself protected.

With more and more people using Macs and other Apple devices, there’s been a rapid growth in the volume of Mac malware and the number of cybercriminals that are targeting