Some say there are three major types of system administrator: the technical geek, the administrative maniac and the freak. We really want to think that none of you, your friends or colleagues match any of these descriptions 🙂 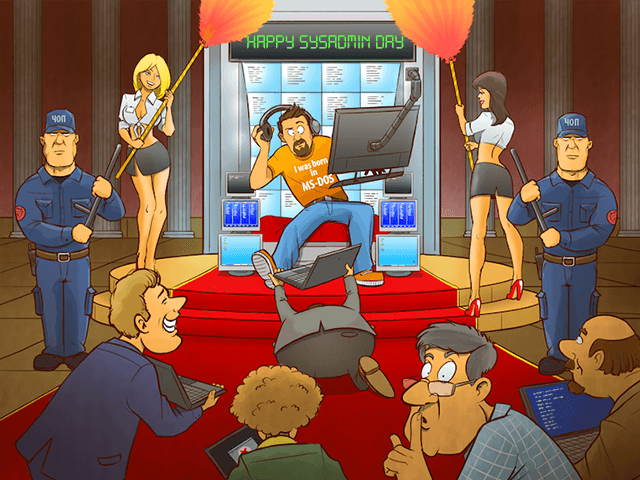 He was a systems programmer in the past and somehow switched to system administration. Writes tons of scripts with shell, C, perl, and WSH. Doesn’t speak most of the time. When there is low disk space, excessive CPU usage or if there’s a need for a new account creation, he solves the problem with a bunch of scripts, some of which work in a way nobody in the company or even in the country knows. If there’s poor network response, he writes another script and rewires all the network hardware he can reach, improving response by 1.5%. Answers users’ stupid question in hex, binary or French until the user gives up and goes away. Upgrades the OS by taking from the source code of a new release only what he likes. Attends raves. Likes poetry.

Some time ago he was an assistant or a secretary, not a nice one. Has been forced into system administration. The most hated IT person in the company. If there’s low disk space, puts disk usage policy in message of the day, then enables quotas, then locks accounts of those who go over it. Those who excess CPU usage suffer the same fate. Never has to create new accounts, because new people without accounts cannot read MOTD, where the new account creation policy is, which has to be fulfilled to create new account. In the case of any hardware fails, he tries to find out who broke it and refuses to fix the system until the person pays for the equipment. Doesn’t answer user questions until user support policy is in MOTD. Maintains queue of questions. Answers them when he gets a chance, but not earlier than two weeks of receipt of the proper form. Doesn’t answer stupid questions until the user can present documentation demonstrating their qualification to use the machine. Does OS upgrade only after going through the lawsuit against the vendor for having shipped a product with bugs in it. Spends spare time modifying old TVs to listen in on cellular phone conversations and listens to the police band. Likes to sing along to car

An aging employee who discovered that nobody wants to pay for his hacking skills. Fell into system administration. Doesn’t allow users to be on the system if they’re not able to break in and create their own accounts. In a case of root disk failure smashes it with a chair, then swears at the guy who puts in a new drive and reinstalls the OS. Screams at users if they ask any type of question until they go away. Sometimes barters knowledge for powerful drinks, but still screams. Loves to upgrade OS preferably around 2 pm, when there’s a maximum active users. Spends spare time modifying old TVs to listen in on cellular phone conversations and jams police band. Drinks everything.

Happy Sysad Day and have a good weekend!