Do you like working in open plan office? Many would say no. The frequently cited drawbacks are obvious: noise, inability to focus, higher fatigue because of continuous interaction with co-workers, etc. Dividing the space into cubicles does not do much better, creating other problems in addition to those already existing. 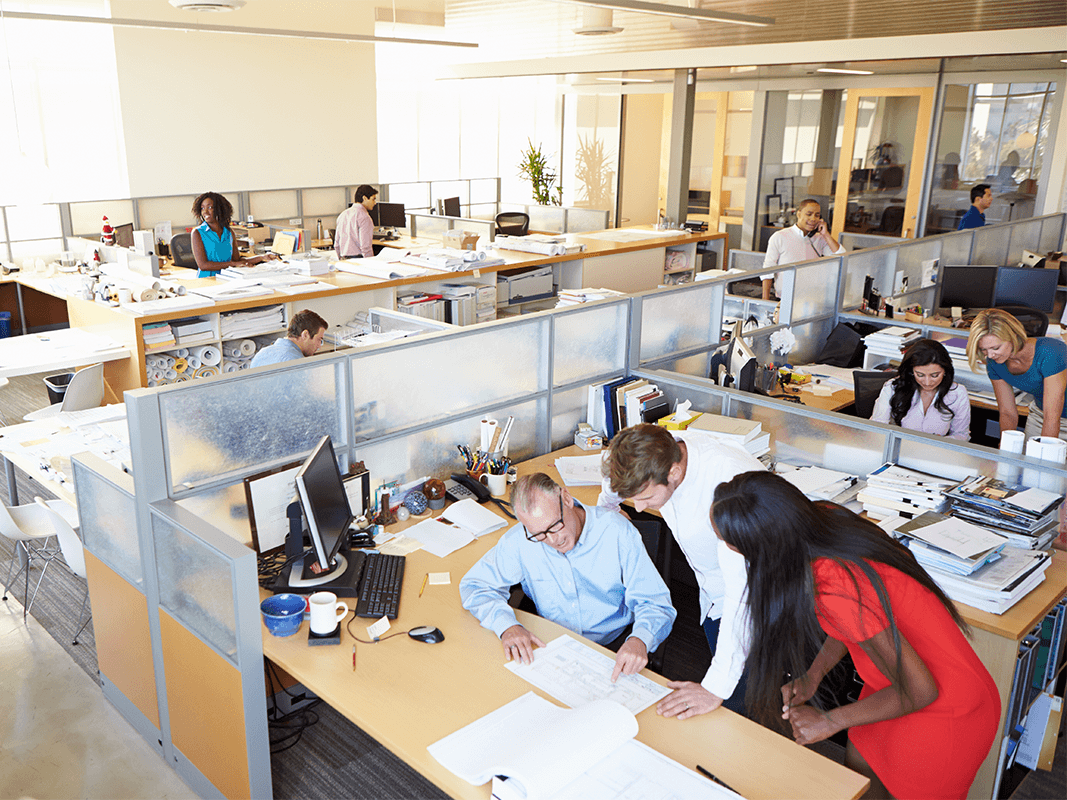 Meanwhile the office ‘fashion’ defines the future, where personal offices are extinct. According to the research conducted by International Facility Management Association in 2010, about 70% of American offices stick to the open plan concept, and this number tends to grow.

Of course, it is not about employers’ conspiracy built with a sole purpose of mistreating their employees. There is one solid reason behind the popularity of open plan design: they are cheaper. The more tightly packed people are, the less the rent, the more the profit. Simple math.

However, this logic is a bit twisted. People are no machines. Such ephemeral factors as mood and physical state heavily impact productivity, which is, ultimately, transformed into lower profits.

Numerous researches claim the problem is real. Not only do people working in open plan offices feel worse and work less efficiently, they are more prone to illnesses.

For example, frequency of cases of short-term queasiness (not necessitating medical assistance) is higher for those who work in large offices rather than among those who work in separate rooms. Working in windowless spaces leads to depression and sleep disorders.

@AllieRenison I feel your pain – I find it so hard to work in my open plan office.

There is one important question rising: how would you make the best of the situation? Here is a couple of tips to help you apply a bit more human approach to soulless cubicles and open plan offices.

Generally, not all the people are that uncomfortable in such conditions. But it is quite of a challenge to introverts who suffer from not being able to spend some time on their own, as Susan Cane states in her works explaining to the entire world the role introverts have in global progress.

That’s why introverts working in open plan offices should have designated areas. One type of rooms could be adapted for work purposes, contributing to focusing and concentration, while the other would be to serve a space to take a break from noise and everyone’s looking, and even suitable for taking a nap. This idea is brought to life by Cane at Steelcase: the cost of totally furnished space start at approximately $15K.

One thing remains unclear: what if extraverts start to come to this temple of introvertism? Who would ever say no to a short nap during the workday? And if facilities are available to everyone, how would one combine them with economy principles?

A 10-panel Agile Acoustics system, imagine this in your office sitting pretty & taking all the noise you throw at it! pic.twitter.com/LHcoU748ag

Such panels with attractive images on them can serve for several purposes: from making a wall more sustainable to noise to separating oneself from a talkative colleague. On a next day, you could rearrange the setting to create a boardroom just in the middle of the office.

Flexibility and reconfigurability is one of the main requirements to the office furniture. Whatever was stable and solid throughout the years, is now to be dynamically adjusted to the changing work environment.

For instance, Herman Miller, an American furniture manufacturer, in their Metaform Portfolio product series uses light plastic elements which serve to assemble a convenient office environment the way one usually assembles Lego. Should you need to brainstorm and exercise some team activities — just push all the tables together. Once you have elaborated an idea and need to spend some time finishing it, break the shared space into cubicles or clusters.

Menéndez and Gamonal Arquitectos, a Spanish company, evangelizes a different approach. To their mind, the very shape of the furniture should encourage team work. For example, when seated at the table which looks more or less like a color palette, one cannot help but start collaborating.

How can you increase interaction within a college environment? Menéndez and Gamonal Arquitectos answered this … http://t.co/OLuWetUrQJ

The idea was initially developed for higher education groups to encourage students to start talking to each other rather than sitting on their own. But, generally, this approach is quite feasible even in business environments.

Hi-tech offices like Google’s or Facebook’s have taught the cold-hearted business community the wonders of lounges, balls, and other non-standard interior elements. Christopher Duffy, a British designer, proposed the next step: he thinks of equipping boardrooms with… swings.

Firstly, when swinging, it is quite hard to speak same old corporate bullcrap which so many corporate meetings are good at. Secondly, this unconventional idea helps to relax and leave you usual comfort zone and start thinking outside the box. However, it would cost you a small fortune. The “King Arthur’s Roundtable with Swings” model for 12 people would cost up to $16K.

Belois Shallane thinks the key to making the office routine more bearable, is applying individuality to each cubicle — for instance, make them look like alphabet. Surely, the essence of this idea is visible only from above, but these peculiarities of each cubicle forming a fascinating maze are quite impressive.

Livening up the workplace with these letter Desks by Benoit Challand, via @designboom pic.twitter.com/gv2XrdxAwQ

To sum it up, there are two key takeaways. Firstly, an open plan offices are here to stay and we have to live with it. Secondly: However, there is hope that new tech, materials and ideas will help us tolerate this new trend.