Unfortunately, it seems like everyone has a cybersecurity scare story that they can tell. Dave Johnson, editor of eHow’s Tech channel wanted to see what kind of stories were out there. Last month, he held an online contest called, “Protect Yourself Online,” and he asked readers to send in their stories. As part of the contest, eHow gave away three copies of Kaspersky PURE 3.0 Total Security. Here are the three stories that were chosen to receive PURE 3.0: 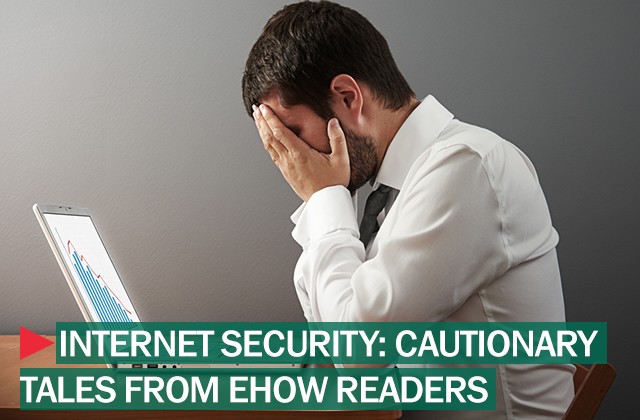 Arnold Couty and the Mystery Charges

“Several years ago, I was engaged and was making final preparations for our wedding.  Our wedding was not elaborate or lavish, and I wanted to purchase some software that would allow me to create nice, custom Thank You cards for those that attended our wedding.  I used American Express to make the purchase online.

Several weeks went by and I received the software via mail.  Shortly thereafter, I received my American Express statement.  Low and behold, the statement had a slew of charges for servers and networking equipment, as well as registration for, shall we say, a lewd domain name.  All-in-all, the charges were just over $6,000.  Of course, I was floored.

After calming my nerves and collecting my thoughts, I called American Express.  I explained that the purchase dates for the network equipment and other incidentals were just after my software purchase.

Thank goodness I was protected by my credit card purchase. All up I had to pay was a $50 deductible.  They informed me that they would research from there and handle any and all legal or funds recovery and my portion of the process was complete.

To make a long story short, this was the first (and hopefully last) time that I’ve been violated by having my credit card/identity stolen.  I’m still very leery of making purchases online but have slowly succumbed to ease and flexibility the internet provides with access to so many resources.”

“Several years ago, while opening an attachment, my Symantec antivirus popped a message about a Trojan that was being downloaded. I had a download manager on the machine, and right in front of my eyes – almost instantaneously – other downloads began to start. A swarm of threat notifications began to pop up from the antivirus. I yanked the Ethernet cord out of my PC. Thankfully, I was not using a wireless connection – otherwise I’d have sprinted to the router and unplugged it.

While my antivirus had quarantined some of the malware, others had executed havoc. I did not want to format the hard drive and lose everything, or back up viruses while creating a system backup. I spent a week getting help from a security forum (using an uninfected PC for internet access), scanning with standalone versions of Malwarebytes and Kaspersky software, generating HijackThis logs, and running Housecall and Kaspersky online scans. Assuming some malware might have been so recent as to bypass antivirus software undetected, I even kept the PC offline for 2 weeks, hoping that the definition files would get better in the meanwhile.

I have been very careful ever since. I now keep the system and data partitions separate, and back up the partitions periodically. I use a virtual sandbox and keep my antivirus updated. Since I am not an IT person, my mantra now is: Stay Cautious, Stay Safe.”

“I am a father to six children.  That includes my four, as well as two more from my wife, Jenny.  Three of our daughters came to me one morning, apologizing. I asked them for what, with a puzzled look on my face.

Keep in mind that they are 12, 13, and 15 – and our 15 year old daughter certainly should have known better.  They said that they were up late the night before, looking up boys in our local area on the internet – and they encountered a bad site.

I asked, “What kind of bad site!?” Well, they had been looking for boys their age and instead they landed on a – shall we say — inappropriate Web site.

I was able to block it and thanked them for telling me.  My wife thought it was hilarious because I am an ordained minister.”

Do you have a cybersecurity scare to share? Tell us in the comments.

I Know Where you Checked in Last Summer

It’s summer, that time of year where we go on vacation, take lots of pictures — and, of course, upload them to Facebook, Instagram and Twitter. And because we want