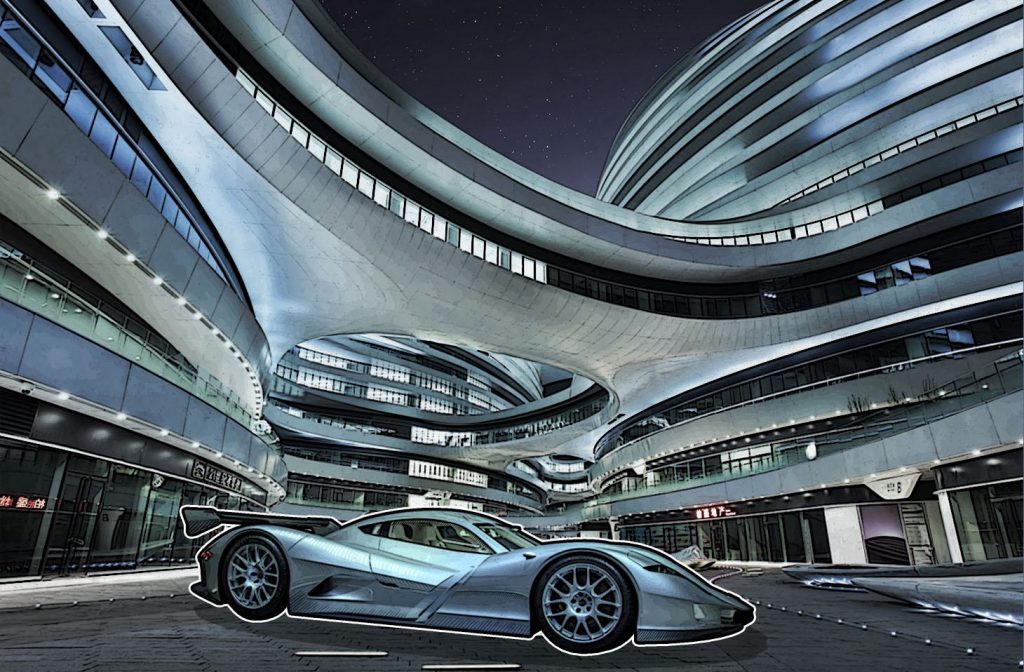 If you’d like to know what cars will look like in the future, the Frankfurt motor show is one of the best places to find out. It is the largest auto exhibition in the world and the main automotive exhibition for the German car manufacturing industry. Its full name is Internationale Automobil-Ausstellung (IAA).

Aspark Owl — the fastest car in the world?

If you have never heard about the Aspark Owl, that’s to be expected. No one but its creators knew of the existence of this supercar before the Frankfurt Motor Show, so its debut took everyone by surprise. 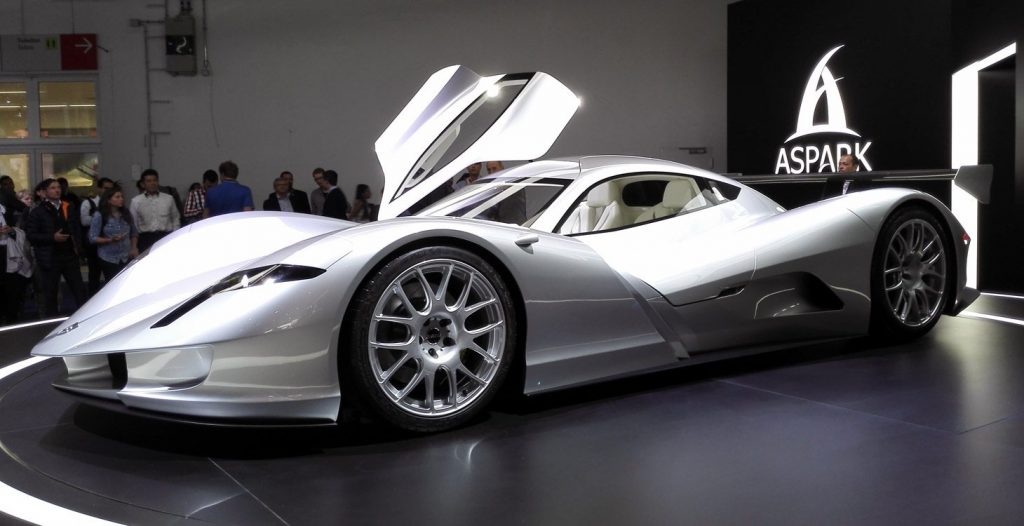 According to the claims of its designers, this completely electrical supercar (it uses a combination of a battery and supercapacitors) is now the fastest car in the world, accelerating from 0 to 100 km/h in exactly two seconds. This result is several tenths of a second better than the previous record-holders — the Ultima Evolution Coupe, the Dodge Challenger SRT Demon, and the Tesla Model S P100D. 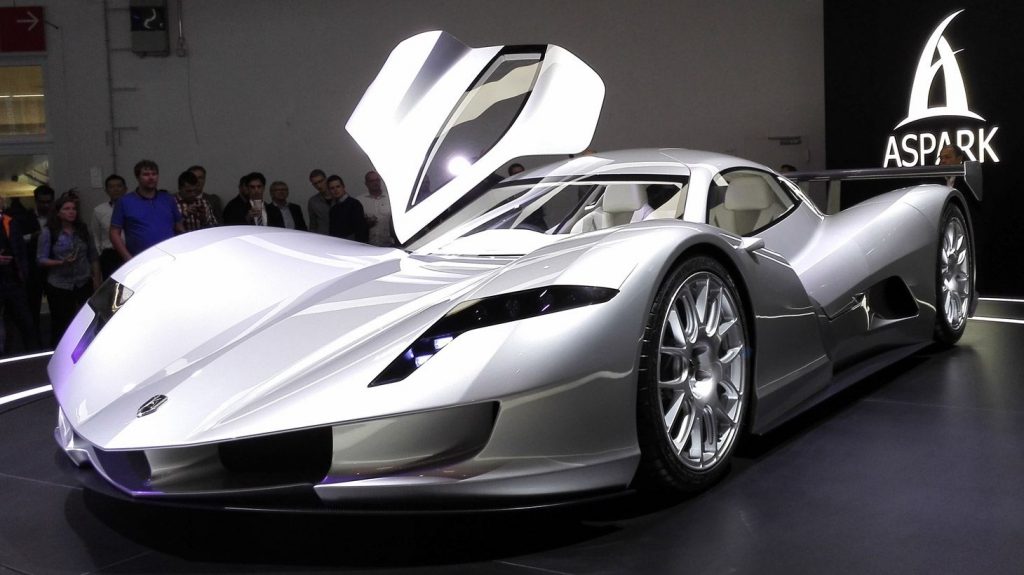 The Aspark Owl’s body is made entirely out of carbon fiber and weighs only 50 kilograms. The total weight of the car is 850 kilograms, which makes it half the weight of the Lamborghini Aventador, for example. 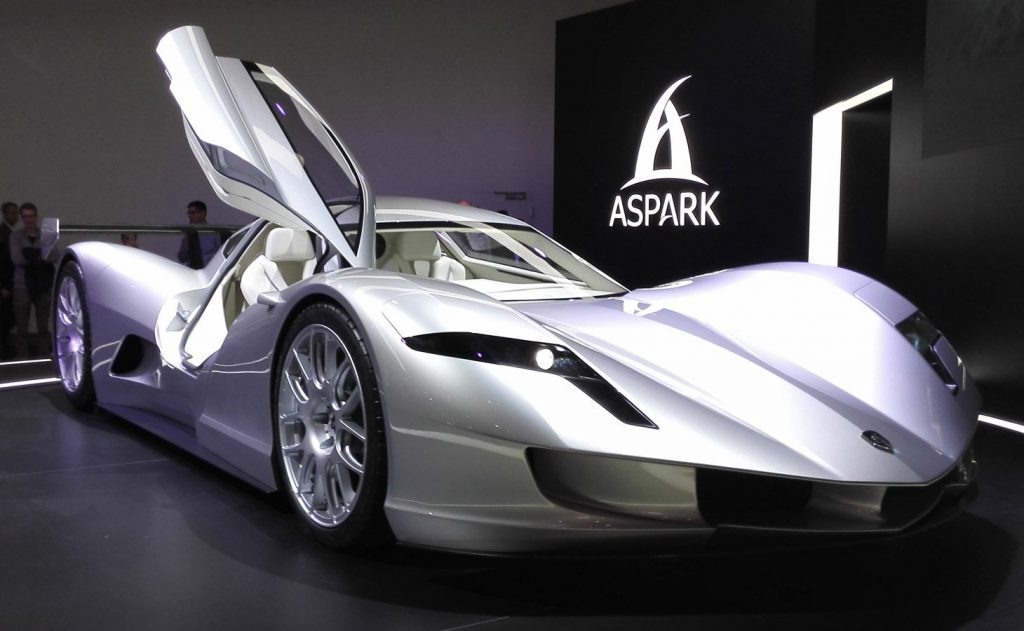 The Aspark Owl is only 99 cm tall

Its maximum speed of 280 km/h is rather low for a supercar, but it’s rather high for an electric car; the fastest the Tesla can go is 250 km/h. However, the Aspark Owl’s range is not great — only 150 kilometers. At the Aspark booth in Frankfurt, one could place a preorder, but the car’s cost and the time of its launch have yet to be announced.

At IAA 2017, Audi presented its new flagship sedan, the A8. Among other things, this sedan has advanced autonomous features. It is the first mass-produced car in the world that, in addition to traditional cameras and sonars, uses lidar. In addition, Audi claims that the A8 is the first ever mass-produced SAE level-three car in accordance with the SAE (Society of Automotive Engineers) classification. 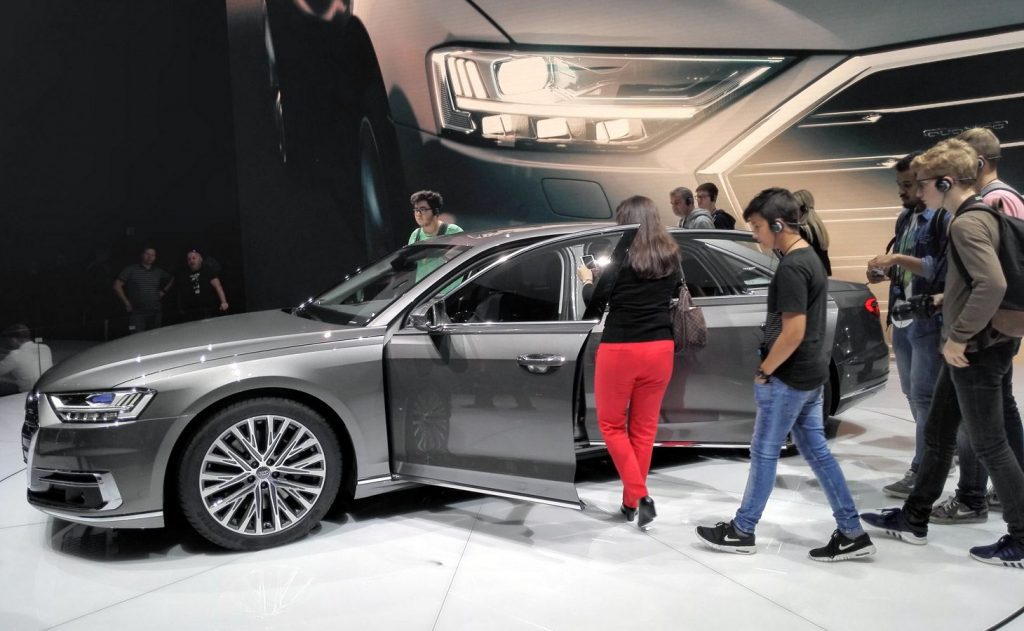 The new Audi A8, equipped with most advanced autonomous technology on the market

That means that under certain conditions — in this case, it would be moving at speeds of up to 60 km/h — the driver can surrender control of the car and be distracted by watching movies, texting, and so forth. Until now, Teslas were known as the cars with the best autonomous technology, but they’re level two, which means that the driver must always watch the road and be ready to take over control of the car at any moment. 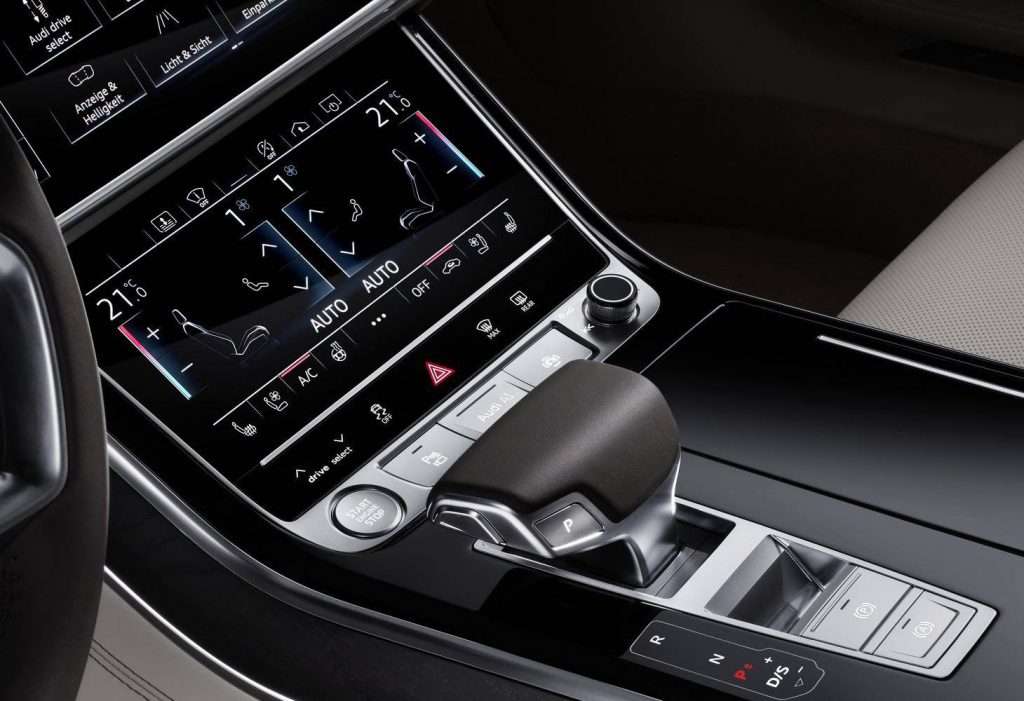 The advanced autonomous technology used in the Audi A8 is supported by Nvidia. The car uses a total of six Nvidia processors, which are also responsible for the dashboard, entertainment system, navigation, and so on.

Truth be told, wireless charging technology has been in Qualcomm’s portfolio for a long time. But the company hopes that next year, this solution will go beyond prototypes and concepts and be used in mass-produced cars. As many as two German auto giants promise to equip their cars with this technology in 2018: BMW is planning to introduce wireless charging in its connected hybrid 530e, and Daimler promises to put it on its flagship hybrid Mercedes S560e. 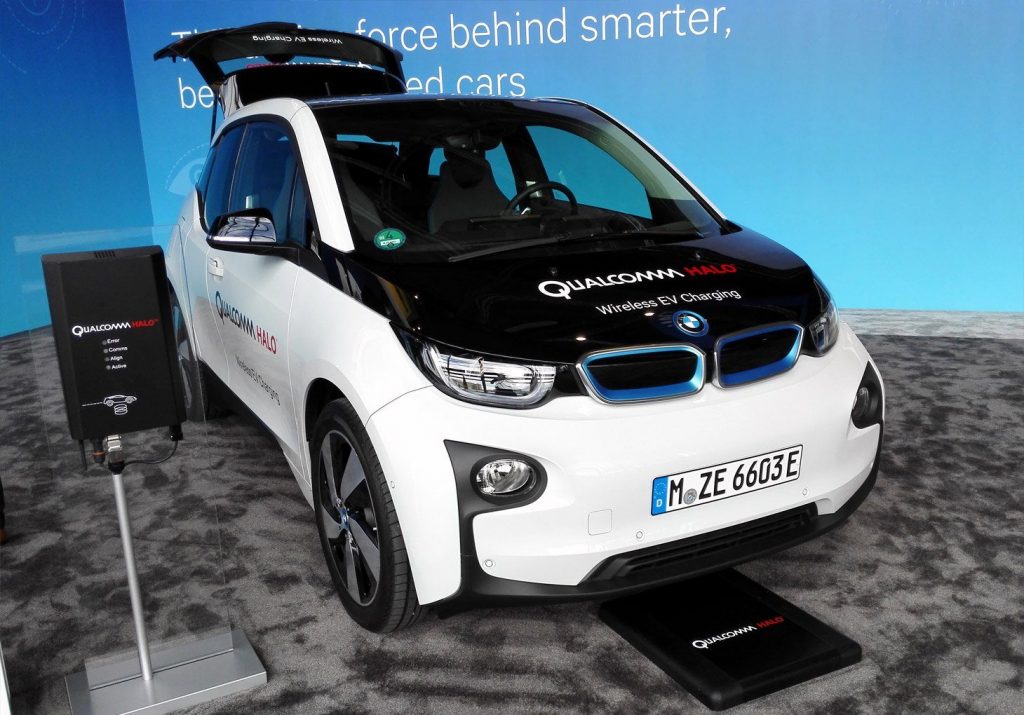 Moreover, Qualcomm is already working on next-gen wireless auto chargers that enable a car to charge its batteries while in motion — and they are talking about charging at highway speeds. 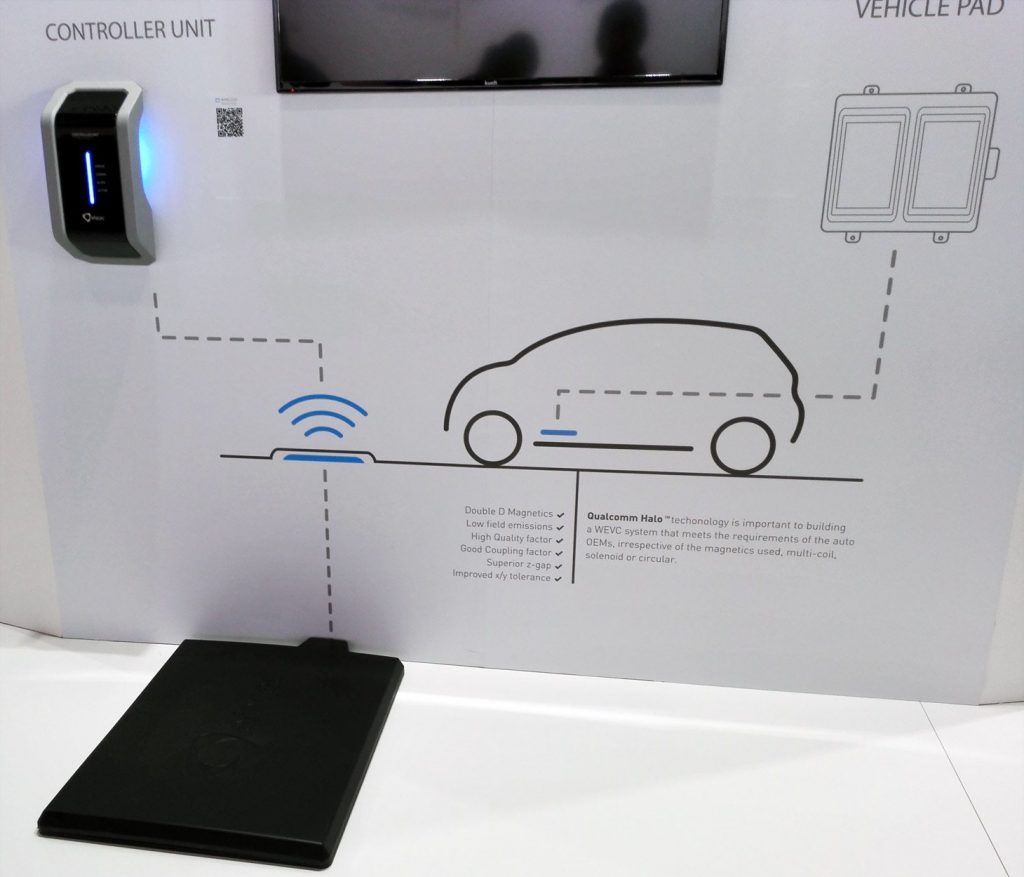 The technology is already being tested as part of the FABRIC Project, sponsored by the European Commission. This project investigates the possibilities of building highways with in-built chargers, which would allow for battery charging on the go — one way to deal with limited battery capacity.

Self-parking: Collaboration between Valeo and Cisco

Apparently, it will still take a while to arrive at fully autonomous cars that don’t require input from a driver. Artificial intelligence still makes too many errors, and no road infrastructure exists that can ensure recognition algorithms are working right. Besides, it is still not quite clear what to do about ethical dilemmas (see “the trolley problem“) and the legal side of things. Extreme weather in some locations complicates matters as well; during the winter even the side of a driveway can be hard to discern, let alone road markings or signs. No doubt these problems will gradually be solved one way or another, but it will take time.

However, autopilot can already be handy in a parking lot. Here we are talking primarily about multilevel parking garages, where one is forced to circle in search of a free parking space, wasting a lot of time in the process.

Speed limits in such structures are minimal; maps of the sites are very precise; and relatively few pedestrians are walking around at any given time — thus, all conditions for using even an imperfect autopilot are met. The computer’s ability to quickly generate a route will also be useful in contacting the control center and locating free parking spaces.

Smart parking garages that allow one to leave a car at the entrance and go about business will likely be here pretty soon — the collaboration between Cisco and automotive supplier Valeo gives us hope in this regard. As part of this partnership, Valeo is developing automotive autopilots, whereas Cisco is providing the infrastructure to be installed in a smart parking garage — communications, video surveillance systems, control room, and so forth.

Amazon Alexa in SEATs and BMWs

Ideally, a driver’s eyes should be on the road at all times. So a car is probably the only gadget in which a voice interface can be not only a nice bonus — for example, for making a call or switching to a different radio station — but a truly useful and even essential function. However, few have been able to develop a well-functioning voice interface. To date, only four companies have found success: Amazon, Apple, Google, and Microsoft. Perhaps, an ideal solution would be to partner up with one of these companies.

That’s exactly what Volkswagen AG did. Having partnered with Amazon, the German giant chose to start with its the most youth-oriented brand, SEAT. 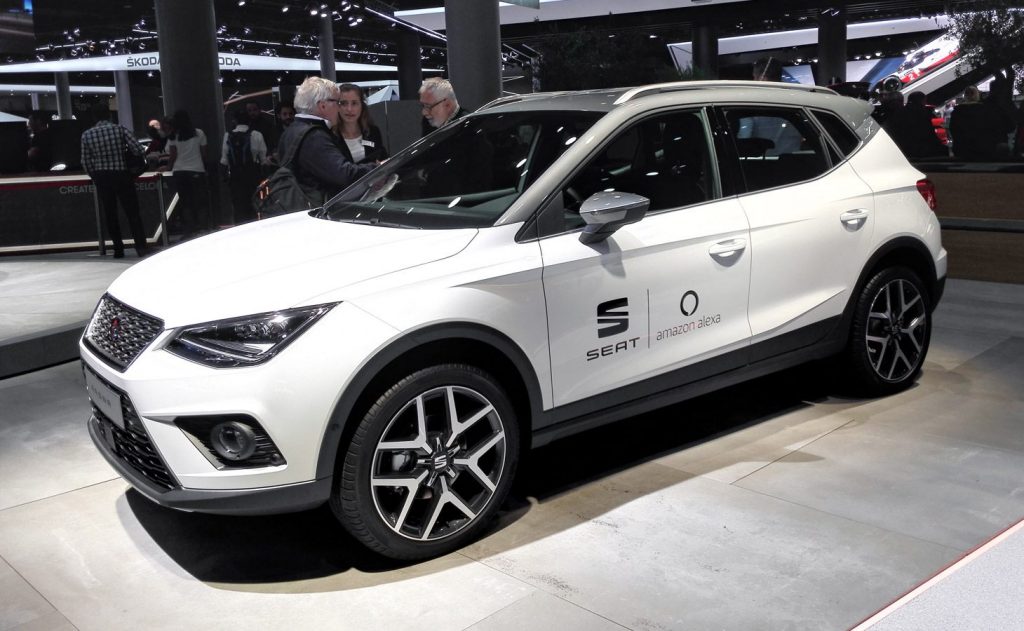 Amazon’s Alexa will show up in Leons and Atecas before the end of the year. Later, this function will come to the Ibiza hatchback, as well as the compact crossover Arona, which made its debut at IAA 2017. The companies promise the voice assistant software will be optimized for use in cars.

BMW announced its intent to install Alexa in its cars as well — the Bavarians promise to add support for Amazon’s voice assistance to all BMWs and MINIs in the second half of 2018.

Unfortunately, the voice assistant will be available only in English and German, because Alexa does not yet know any other languages.

In-vehicle networks in cars of the future

An in-vehicle network is a very complex and convoluted thing. It is not at all obvious to the user, because the network itself and the majority of electronic components connected to it are always hidden as far as possible from the human eye. At EDAG’s booth, visitors could see what that network looks like from the inside out:

This is what an in-vehicle network looks like now

At present, the total weight of wiring alone in a car can amount to almost 50 kg! And it could go higher; more and more electronics are appearing in cars all the time, requiring more and more connections. It’s already time to start thinking about how to reduce the amount of wiring and on the whole declutter the car’s onboard network.

EDAG is suggesting a new approach: dividing the car into several zones, each with its own electronic controller, and with equipment in the zone connecting to the zone’s controller. Zones are connected by quick and light Ethernet adapted specifically for use in a car. And components connect to zone controllers through a LIN bus developed (and already in use) as a cheap (but not very fast) alternative to CAN bus. 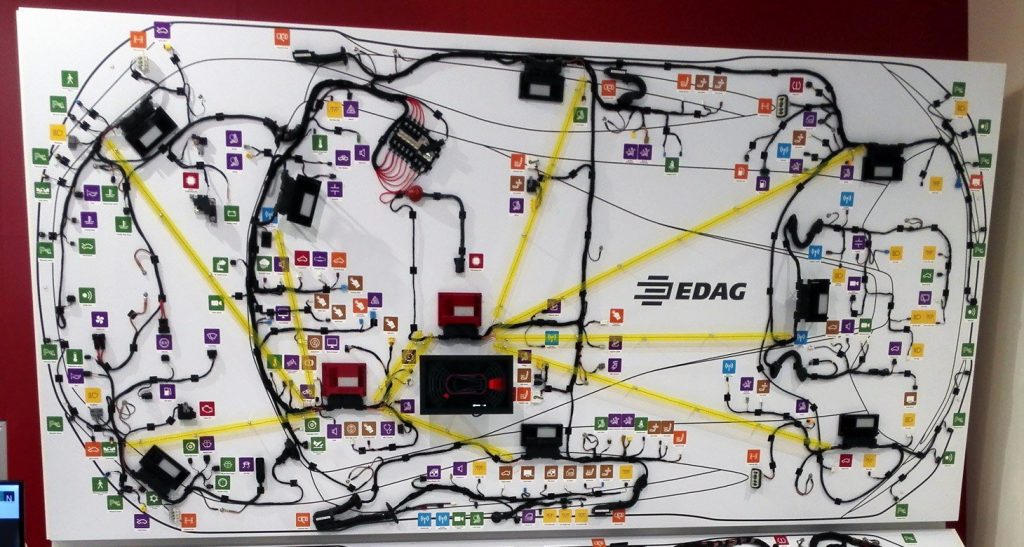 According to EDAG, this is how the onboard network will look in cars of the future

In the somewhat more distant future, onboard networks will be even less cluttered and more centralized. Two central onboard computers, each of which will be connected to either the left- or the right-side zone controllers of the car, will control the system. These hubs will be connected by a gigabit channel. 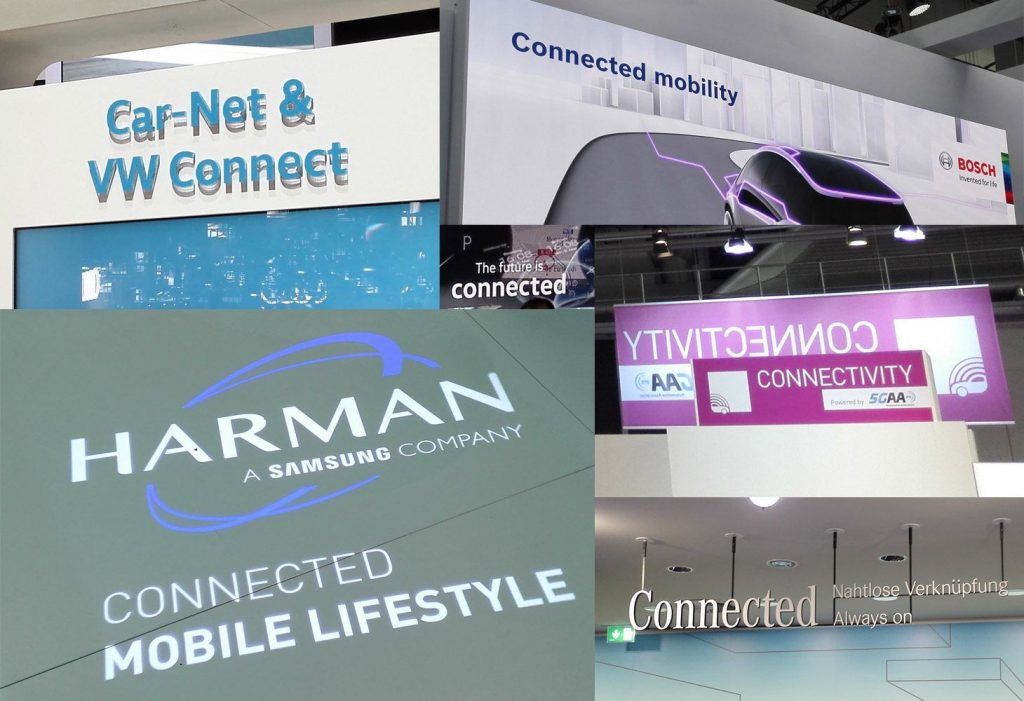 The words “connected” and “connectivity” were likely heard more than any others at IAA. Unfortunately, that wasn’t the case with the word “security”: Too few companies in the automotive industry are addressing cybersecurity

What makes a car’s onboard network different from one found in an office? For starters, there’s no IT department to monitor the network. And, of course, there are no common IT security solutions for cars as there are firewalls and security software for endpoint devices.

Over the past few years, car hacking has gone from theory to reality: we’ve seen a number of examples of hackers who can hack a car using its Internet connection (and these ten examples are by no means a complete list). If any particular makers or models have not been hacked yet, that’s likely only because hackers haven’t taken up the challenge.

The issue here is that cybersecurity is not designed into a car’s infrastructure from the very start. Auto manufacturers do not as of yet have enough experience to take all possible cyberthreats into account and to include in their design process all of the procedures required to prevent cyberincidents. The security of individual components is tested, but not the onboard network as a whole. 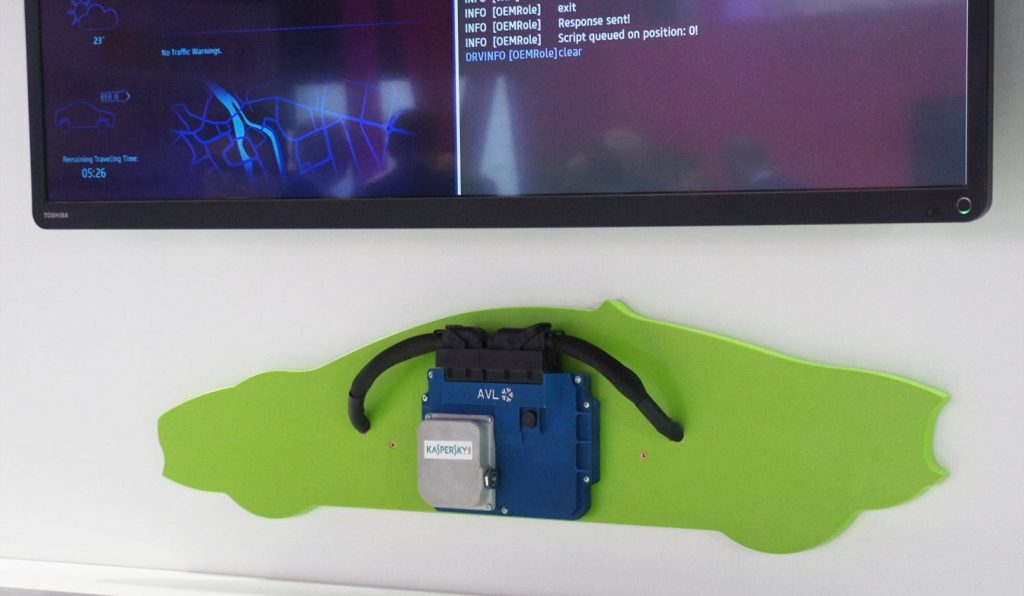 The Secure Communication Unit — Kaspersky Lab and AVL partner up

It’s obvious that this approach needs to change, and we’re ready to help and share our extensive experience in IT security. Kaspersky Lab has partnered with AVL, which specializes in automotive industry equipment, and together the companies have created the Secure Communication Unit. The device uses our secure KasperskyOS and facilitates the security of all communications to and from a connected vehicle.

We are actively seeking partnerships with all interested companies. It’s time for all of the players in the market to take car security seriously.

The Lord of the VPNs

The right way to make backups

Everything you need to know about how to back up data right.