An airborne plane is one of the safest places on the planet. However, there are rules to abide by in order to make sure the flight is a comfortable and pleasant experience. 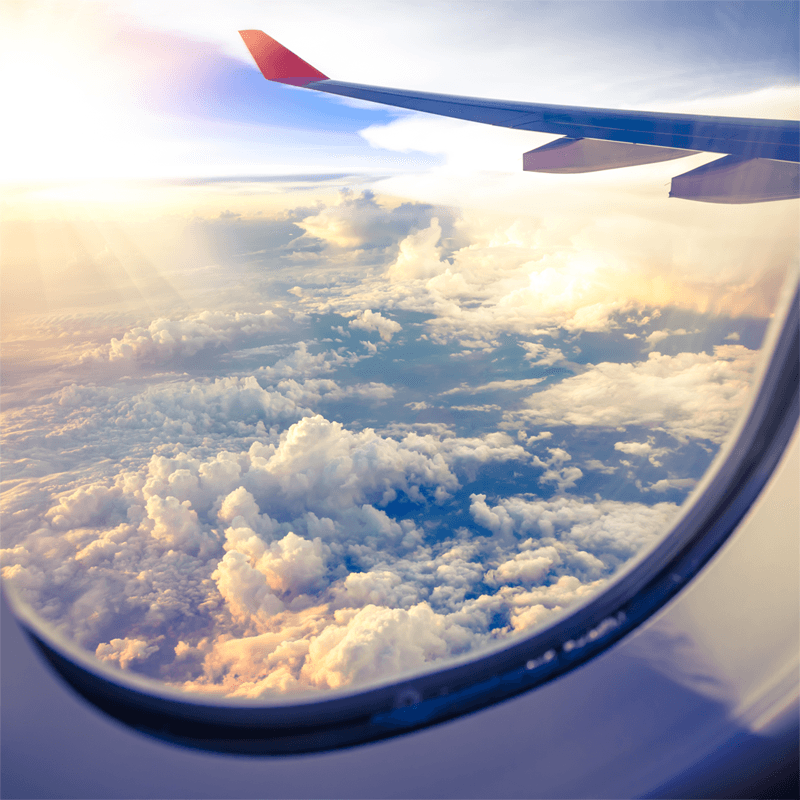 If you happen to be aerophobic, there’s no use panicking when you are already seated. Calm your nerves by acknowledging that everything is beyond your control. We understand this fact might scare the living hell out of you, but… just think about it. You were not afraid during your taxi ride to the airport, where you were unable to control the driver and the drivers of the other vehicles on the road.

Instead of worrying about things out of your control, try to focus on something you are able to do for your safety.

Spoiler alert: Some taxi drivers are, in general, less qualified when compared to pilots, and the same applies to the control exercised over technical conditions and maintenance of taxis and airplanes.

Don’t try to listen to the sound of the engines or look for a glimpse of uncertainty and fear in the flight attendants’ faces. As we previously noted, no one would let an inoperable aircraft leave the airport, and, should any problem arise, pilots would know a lot faster than you would. All the flashing lights and displays in the cockpit serve this very purpose.

Instead of worrying about things out of your control, try to focus on something you are  able to do –  you can and should take action to make your flight a safer experience.

Sounds trivial, but flying with your belt securely fastened is the cornerstone of your in-flight safety. A buckled seatbelt which is not fastened and just lies loosely on your lap is equal to wearing no belt at all. Why is that? The answer seems obvious when we talk about landing: the pilot might hit the brakes harshly, but what about takeoff?

When taking off, a plane runs at a speed comparable to that of a supercar: at about 200 miles per hour. But the takeoff could be aborted unexpectedly due to various reasons: a car appeared on the runway out of nowhere or another plane taxied just ahead of you, and the plane has to stop to a halt.

The brakes function automatically: the pilot sets the automated control system to the so-called RTO (Rejected Takeoff) position, which is specifically designed to maximally cut the brakes.

When the takeoff is aborted, the plane comes to a complete stop in just a few seconds, running at the acceleration of about 1.5 times higher than at free fall. If you have not fastened your seatbelt, you will fly forward leveraging the moving force of momentum and, in the best case scenario, will hit the seat ahead of you with your head.

The distance between seats is about 20 inches, and when your belt is well fastened, it’s unlikely you’ll hit the next seat, but once your belt is at least 5 inches loose, you are in for a very harsh experience. Just to quantify the sensation of this unfortunate event, try experiencing free fall headfirst from a table or a chest of drawers. Well, of course, we did not mean ‘try’ in the sense of the word — just imagine it happened to you and learn your first lesson: fasten your seatbelt.

By the way, this is also the reason why flight attendants ask you to lift and lock the tray tables when taking off: hitting the thing with your stomach, running at a 1.5g acceleration, is no fun at all.

Tip #3. Fasten your seatbelts through the entire duration of the flight

Even when the ‘Fasten seatbelt’ sign is switched off, you’re better off wearing your seatbelt. While there is no likelihood of a plane stopping abruptly when airborne, there could be turbulence, wind shear, and other air bumps.

Everything hit the ceiling–including some people. Little warning. Like falling off a cliff.

Unfastened passengers, due to the momentum, can jump up, hitting their heads badly. It might sound unbelievable, but simple physics works here.

Luckily, I was belted in.

The most dangerous place to find oneself when flying through turbulence is the lavatory. They are very confined, and there are prominent objects inside, which can prove fatal if hit with enough force.

As soon as the ‘Return to your seat’ indicator flashes, you should quickly finish your business and return to your seat. Of course, turbulence that bad is a rare case, but experiencing it while in the lavatory can be dangerous.

Tip #4. Turn off all electronic devices

Of course, flight attendants are there to check whether you have switched off your electronic devices. Do electronic devices pose any danger? Initially, their use was prohibited to exclude the possibility of interference with on-board electronic systems.

Now, of course, all electronic systems engaged in conducting the flight are well screened. The aircraft won’t crash due to a tablet working in the background. In the worst case scenario, if the interference from a gadget influences the Instrument Landing System (referred to as ILS) — by the way, this is feasible as receivers work with levels of voltage as low as several millivolts and are a piece of extremely high-precision technology — the pilot would override it and undertake the attempt at landing.

But in reality, the main reason is not interference. A tablet, a laptop, and a smartphone are relatively heavy and hard objects. In the event of emergency braking (see #1), they might slip out of one’s hand and inflict damage onto other passengers. To model a similar scenario as in #1, imagine someone dropped an iPad onto your head from the height of 20-30 inches.

Why aren’t books and magazines prohibited at take-off? Well, they are relatively soft. Some aviators also point out that during takeoff and landing, a passenger must not be distracted by Angry Birds, but look out of the window in order to spot irregularities and immediately report them to the crew. This might also be the reason why the flight attendants require passengers to lift the window shades.

This reason is rather imaginative: reading is not prohibited during takeoff, and not all passengers are seated by the window. The window shade must be lifted to provide for faster eyesight adaptation to lighting conditions outside, and this also is the reason why the lights are dimmed during landing and takeoff. In the event of an emergency, passengers must leave the aircraft quickly, and those several seconds it takes to adjust eyesight are critical.

It goes without saying that headphones are not to be used in order to make sure a passenger pays full attention to any instructions that might come from the crew in the event of emergency.

Tip #5. Place your carry-on luggage under the seat in front of you

Many people are not aware their carry-on luggage is better off positioned under the seat in front of them rather than packed tightly in the overhead compartment. The more tightly packed it is, the higher the chance of it opening accidentally due to serious turbulence and causing heavy objects to fall onto aisle passengers’ heads.

Overhead compartments are designed for outer garments, hats, pillows and small purses. If your luggage won’t fit into the overhead compartment just above your seat, try other compartments. But the best place of all is under the seat where they can be easily accessed without hassle.

Tip #6. Say no to alcohol on board

It wouldn’t hurt to relax a bit, but there is a solid reason for not drinking at all. Consumption of alcohol dehydrates the body, and your organism already manages a great deal of stress in low-humidity environment. Moreover, lower air pressure enhances  intoxication.

That means even a modest portion of alcohol would provoke an effect comparable to drinking done at a college fraternity party. First, you are in for an overdose (some would simply fall asleep immediately, but some might crave action, going as far as attempting to hijack a plane). Second, expect a hellish hangover with headaches and body aches.

So, if you decide to drink alcohol, try to consume more non-alcoholic liquid at the same time (except for anything with bubbles, otherwise the inebriation effect will intensify).

There is one thing you should understand about aviation: it is a strictly regulated and well-organized industry pursuing a single goal: revenue. Accidents, traumas on board and other incidents aren’t things that increase revenue.

How safe is it to fly on an old aircraft? Just as safe as new ones. https://t.co/VbOOfC6rlx pic.twitter.com/CdtSOXCVtJ

This, and not abstract concepts like love for all people, is the main reason why airlines, aircraft construction bureaus, and regulators do anything to make the millions of flights performed every year all around the world absolutely safe for passengers.

As aviators say, the rules in aviation are written in blood. They employ absolutely infallible logic, even if they seem strange or trivial to an ordinary passenger. So, just obey the rules and you will be absolutely fine.

#BionicManDiary entry 002: The one where the chip started to toss and turn at night

During my first two weeks of the biochip experience I had time to mull over a lot of things. In this post I’m going to touch upon the subject of form factor.