The pervasiveness of public WiFi has reached a point now that it’s become difficult to avoid. You actually have to go out of your way to NOT use public hotspots, and, according to a recent poll, not many people are interested enough in security to make that effort. But that’s exactly what they should be doing, given the prevalence of threats and attacks on open wireless networks. 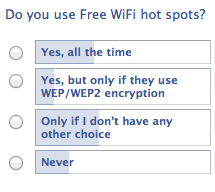 In a poll conducted on Kaspersky’s global Facebook pages, 32 percent of the more than 1,600 respondents said that they commonly use public wireless networks, regardless of whether the networks have encryption enabled. That’s a bad indication of the level of trust that many users are placing in these networks. Public WiFi networks operated by coffee shops, airports or train stations are not just open to users, they’re also open to hackers who are looking to grab sensitive user data.

Hackers can employ well-known, relatively simple tactics to intercept unencrypted user traffic destined for banks or PayPal or Amazon. Even when hotspots have encryption enabled, there still are attacks that hackers can use to compromise the wireless routers themselves. So for the seven percent of respondents to our poll who said they only use public WiFi if encryption is enabled, that’s a nice idea, but it doesn’t solve all of your problems.

The safest approach when it comes to public wireless networks is not to use them at all. And this doesn’t apply just to laptops. Your smartphone will try to connect to WiFi networks whenever possible (unless you tell it not to) and to an attacker, all data looks the same, so he’ll be happy to steal yours, no matter which device it comes from.

If you own an Android device, your phone could soon be used against you. Research released in late September introduced a new tool that targets Android devices by taking control