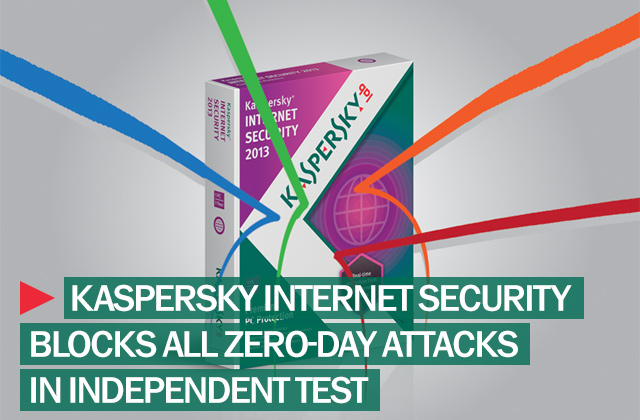 Criminals constantly look for backdoors and vulnerabilities to discreetly infect your PC with malware while you are browsing your favorite websites.

The most valued and effective way to do this is by utilizing still unpatched vulnerabilities using so-called zero-day exploits. Criminals buy and sell this kind of exploit for tens of thousands of dollars, but you may effectively ruin their efforts for only $79.95 We’re happy to say that Kaspersky Internet Security users are amongst the most protected people when it comes to this kind of threat, and a recent two-month long test conducted by the independent lab AV-Test just proves this point. Our product blocked 100% of Zero-day threats during the test and scored 16.5 points out of a possible 18 for its protection capabilities, performance and usability.

Kaspersky Internet Security scored top marks in two categories, gaining six out of six for both protection and usability. In the performance category, Kaspersky Lab was awarded 4.5 out of 6 against an industry average of 3.8. The combined total saw Kaspersky Lab’s product take second place in the testing overall.

According to the cloud-based Kaspersky Security Network, about 200,000 new malware samples emerge every day, compared to 125,000 just a year ago. The price of poor-quality protection against cyber threats