Brace yourself – I am going to share the most shocking and counterintuitive discovery I’ve made this year about electronic games. Free games bring more revenue than gaming consoles and console games combined! 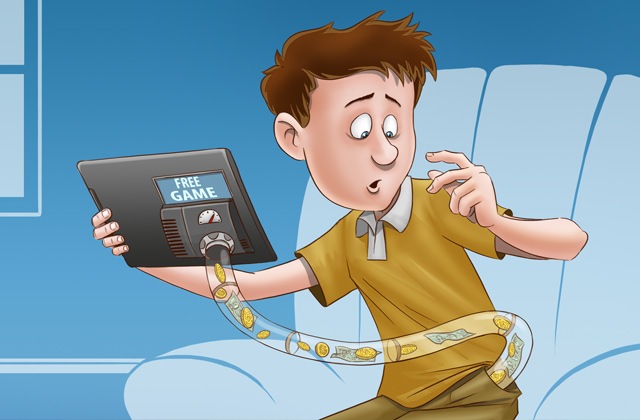 If you think that those earnings are made using, let’s say, advertisement banners, you’re probably going to change your mind now. Simply put, a typical scenario involves paying during play instead of paying before download. A hefty 77% of all Apple App Store revenue now comes from gaming, and 92% of this sum is paid using in-app purchases. Winners in modern games often spend an unexpectedly significant sum of money, which is split here and there during gameplay. Game developers, as with all people, fall into one of two categories: ethical and not so ethical.  In the latter case, developers purposely set up game rules in a way that makes you spend money as often as possible while thinking about your spending as little as possible. Hired psychologists develop schemes to exploit human foibles and perception and make this “milking” process widespread and friction-free. Here are some signs to look out for that could be telling you that you might be spending an unpleasantly large sum of money on another “free” game.

1. You belong to the high-risk group

There are few social groups that tend to spend money on virtual goods, and developers often tailor game concepts and visuals to target these specific groups. The ideal audience is actually children, as they can easily spend thousands of dollars on magic potions and swords. However, there are serious risks for developers doing this, as they must take into account parents, possible legal actions and government regulation. That’s why developers prefer to target gamers that are of legal age, but still younger than 25 years old.  Brain development continues until this age, and younger people are less able to make complicated, fully rational decisions. They even still enjoy cartoonish characters, which suggests that some remnants of child thinking are still in effect.

Among “whales”, which is the name of the top 5% of spenders, the dominant audience is males (66%) under 30 years old. They typically play not just mobile games, but console games as well, and they spend over 11 hours per week playing.

2. A game actively persuades you to connect to Facebook and other social accounts

Advertisements typically promise that you’ll make achievements in front of your friends and find game partners as well. Developers though, have a totally different task – they will infiltrate you with information about your friends having greater success than you while playing. This effectively exploits vanity – someone, unwilling to pay for game progress, will happily pay 5 bucks just to give the dust to “this smug”.

One of the most deceitful tricks used in games is  “toy money”. Subconsciously, it’s easier to spend toy money than real money. If you were offered 5 extra lives for $2, you’d probably decide to buy a cup of coffee instead. But you’re more likely to spend your money if you’re offered the same 5 lives for 16 pink crystals, which you bought 2 days ago on a big sale (as many as 25 crystals instead of 20 for just $3). The longer the chain that exists between money and spending, the more effective the trick is. To make a chain longer, game developers often rely on objects produced by combining other objects. Let’s say you craft a ring using 10 colored crystals, then you craft a necklace using three rings and a chain, and then you have to buy a unique big crystal to make a super-necklace. Each component costs some money, but when it comes to a super-necklace, almost no one ever calculates that it’s effective cost is somewhere near $50.

Unfair games are programmed to dramatically raise the complexity in the middle of the game, so only a small percent of players can win without paid power-ups.

4. You play successfully for a long time, and then you have trouble proceeding further

Another classic trick in free games is to use a gradual increase of game complexity to reach extreme levels. Of course, it’s normal that the final levels of any game are more complex than first. However, fair game design assumes the average player will become skilled enough during his play and may win the game without extreme effort. About 70-90% of players can win a fairly designed game, given they spend a projected amount of time mastering the required skills.  Unfair games, on the contrary, are programmed to dramatically raise the complexity in the middle of the game, so only a small percent of players can win without paid power-ups.

The psychological trick works in this manner: you play (free) for a long time, develop your character, increase his/her skills, earn ammunition (or build houses in the kingdom – doesn’t matter), and then it all suddenly falls apart. Maybe you meet the “boss” and lose the battle, which causes you to lose half the stuff you earned. You have a choice – use a paid option to play this episode once again (and pay some more to buy power-ups and win the battle), or start over and raise your hero again. These mechanics are a clear extortion, as they make you pay just to avoid losing the significant amount of time you already spent.

Unfortunately, only  the first three signs are easy to spot while familiarizing yourself with a new game. The last two instead emerge on within the latter stages of playing. That’s why we suggest completely avoiding any game that show any three of these signs or behave aggressively. There are thousands of games, which offer pleasant, but entirely reasonable power-ups, which are not necessary to win the game. Other ethical in-app goods are extra level packs, character decorations, etc. Stick to those ethical games, have fun and don’t fall a victim to tricksters.

Defense of the Accounts 2: Tips on safe gaming

Poll: Has your Mobile Phone Ever Been Stolen?